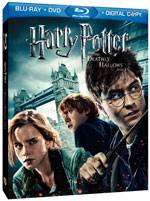 Purchase   DVD/Blu-ray/4K UHD
It has been a long road for Harry Potter fans.  Since the first book was adapted into a movie, fans have been clamoring for each chapter in the saga of the "boy who lived".  Now finally after many years of waiting, we have started down the road to our ultimate destination -- Harry pitted against Voldermort.

When we had left our heroes at the end of the Half Blood Prince, Dumbledore had died at the hands of Snape; and now Harry was faced with the task of tracking down the horcruxes that Voldermort had placed in remote locations around the world.  As the film opens, Harry is spending his last night amongst the Dursley's before the spell of protection created by his mother in her final act of defending his life as a baby, wears off.  As the Dursley's make their way out for the evening, a group of Harry's closest allies arrive to assist in moving Harry before Voldermort's disciples' come to finish Harry off.

Each of the members drinks a potion to disguise themselves as Harry to confuse their attackers so they won't know where they are taking Harry.  Along the way, Voldermort's cohorts assail them with a volley of spells, trying their best to take Harry out.  In the midst of all the chaos, Harry's pet owl, Hedwig, is killed.  There is no time for Harry to deal with this as they are still being assaulted. After some harrowing close calls, Harry and Hagrid finally arrive at the Weasley's home.  Once all the other members of the Order reconvene, they learn that they also lost Alastair Moody in the fray.

These deaths are signs not only to the characters in this story, but the members of the audience that no one is safe.  Not all things are dark and sad; there is some brightness to these dark times.  One of the Weasley children, Bill, is about to be married to Fleur Delacour.  The wedding takes place without a hitch; and during the reception, some new information is learned from an old face.  It seems there is a myth about something called the Deathly Hallows.  What they are and what it means is a mystery; but regardless, it pique's all three of our leads' interests.  The joy of celebration is interrupted when a message arrives that Death Eaters are on their way to arrest everyone at the party.

With only seconds to get away, Harry, Hermione and Ron escape to the house of Sirius Black. There they take refuge while trying to devise a plan for their next move.  They decide to make an attempt to break into the Ministry of Magic and acquire one of the horcruxes being worn by none other than Dolores Umbridge.  After some close calls, they are able to get the necklace and just barely escape before almost being captured.  They escape to the wilderness where they make camp and attempt to figure out how to destroy a horcrux.

Unfortunately, it is easier said than done; and while trying to figure it out, each member of the group takes turns wearing it.  Things go badly though as Ron, who begins to suffer side effects from wearing it, berates his friends; and in a fit of anger, abandons them.  Heartbroken at this new turn of events, Harry and Hermione are now more stressed than ever.  They are unable to have a decent conversation with one another without becoming upset.  Harry decides to visit Godric's Hollow, the Village where his parents were killed.

He believes if he can find a woman named, Bathilda Bagshot, he can learn some of the truth about Dumbledore and possibly more about the horcruxes themselves.  Unfortunately, this too goes badly, as Bagshot has been dead for some time, while Voldermort has used magic to keep her body animated in an attempt to both lure and kill Harry.  With luck, Hermione is able to whisk them away before either is harmed, but Harry's wand is damaged in the process.  That night, while on watch, Harry sees a patronus of a doe and thinks it might be a sign from Dumbledore.  He follows it into the woods where he finds a pond; and at the bottom of the pond, is the Sword of Gryffindor.  This is a magical weapon that is powerful enough to destroy the horcrux.  As Harry attempts to retrieve the sword from the bottom of the pond, the necklace goes berserk and almost drowns him.  Out of nowhere, Ron appears and pulls Harry out along with the sword.  Harry asks Ron to destroy the horcrux, but when Harry opens the necklace, a black cloud erupts, showing Ron dark and terrible visions.  Incised, Ron angrily lashes out and destroys the necklace, putting an end to another horcrux.

When they return, instead of being happy, Hermione throws a fit at Ron for abandoning them. Regardless, Ron has returned to the group and now the trio makes their way to Luna Lovegood's house.  They hope to find out about the symbol they keep seeing which refers the Deathly Hallows. When they arrive, Luna is not there; but her father invites them in.  Once inside they ask him about the Hallows and what they mean.  He informs them that they are part of a very old tale involving the spirit of Death itself.  The Hallows are in fact, three individual items: an invincible Elder Wand, a Resurrecting Stone, and an Invisibility Cloak.  The items were once owned by three brothers but have been lost through the ages.

When the three friends attempt to leave, Mr. Lovegood stops them and informs them that his daughter has been taken hostage and the only way he can get her back is if he gives them up to the Death Eaters, who are already on their way.  The three friends try to escape, but are captured in the process.  Some quick spell casting by Hermione alters Harry's face so their enemies do not realize who he is.  They are taken to the home of the Malfoy's.  There they encounter Bellatrix who is unaware that she has Harry Potter in her clutches.  But she does find the Sword of Gryffindor amongst their possessions.  In a fit of rage, she imprisons Ron and Harry, keeping Hermione to be tortured.

In the dungeon, they encounter Luna Lovegood, Ollivander the wand maker, and a goblin.  With some help from their old friend Dobby who secretly teleports in, they break free of the dungeon and fight their way out.  In the midst of all the confusion, Harry is able to acquire Draco's wand, but Dobby gets stabbed by Bellatrix.  When the friend's teleport away, they find themselves on a beach with their dead friend in Harry's arms; meanwhile miles away, we see Voldermort approaching Dumbledore's tomb.  He opens the tomb and takes the Elder Wand from the Professor's dead hands.

It is here that the movie ends; since the book was so long and had such intricate detail this time around, it was necessary to split the book into two movies.  In that way, the film makers could retain the entire story.  The film does a great job of bringing the final book to life while still retaining the core messages that are at the heart of the book.  That is what made the books so successful, not that they were so appealing to children, but they matured just like their readers.  As the characters in the books grew up, so did the stories in which they were involved in, and that is what makes for a successful book.

Warner Bros has spared no expense of the home entertainment release Harry Potter and the Deathly Hallows: Part 1 on Blu-ray/DVD combo pack.  The films dark and dreary tone perfectly transfers over to the home entertainment medium.  The video encoded with the latest AVC codec perfectly pulls in the dark and dreary tone of that David Yates used for the film.  The audio transfer used in this release is as with most Warner Home Entertainment releases – amazing!  Presented in DTS-HD Master Audio 5.1 surround track, it truly shines through and brings the film home.  During the opening action sequence, you might find yourself inadvertently ducking from death eaters in your living room.

If you had to pinpoint one area lacking on this release, it would be on the special features located on the second Blu-ray disc in the set.  The Maximum Movie Mode, Focus Point Featurettes, and Behind the Story Featurettes give a nice look behind the scenes of the making of the film and life on the set of the Harry Potter films; however, it feels like Warner Bros is holding back a bit; and we will have to probably wait until the "ultimate edition" Blu-rays get the complete set of features.  On a brighter side, the film includes a sneak peak Harry Potter and the Deathly Hallows: Part 2.  However, since this feature was not available on the press review copy of the film, we are unable to give you any glimpse of what is going to happen this July to Mr. Potter and gang.

Harry Potter and the Deathly Hallows: Part 1 is an amazing film, and its debut into the home entertainment market is an eventful mark as well.  It is, however, a bittersweet entry since unfortunately, the saga of one of the best series ever put on film will be over this year.
Cast:
Directed By:
MPAA Rating: PG-13

For more information about Harry Potter and the Deathly Hallows: Part 1 visit the FlickDirect Movie Database. This release has been provided to FlickDirect for review purposes. For more reviews by Chris Rebholz please click here.

Allison Rose
While all eight films are out on Blu-ray, the last four come to 4K Blu-ray this week and promise to be worth the asking price.  The content hasn’t changed but the quality is just a little higher standard.
Full Review | Grade: A