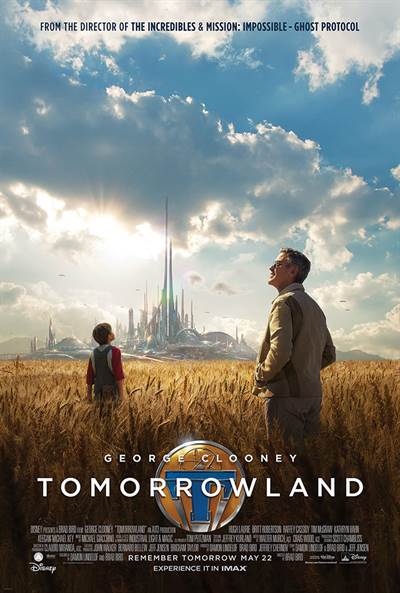 Disney's latest release TOMORROWLAND opens nationwide on May 22, 2015 but South Floridians can win passes to a complimentary screening before it is released in theaters.

Enter by downloading the Movie Hype App and "following" TOMORROWLAND. Be sure to tell us the name of your imaginary, alternate universe with the hashtag #contest. We will choose the best, most original entries to win a complimentary pass for two to see TOMOROWLAND on May 19, 2015 in Boynton Beach, FL, before it opens nationwide.

Contest ends May 18, 2015. For more information please visit the TOMORROWLAND movie page on FlickDirect.com or the official website at http://movies.disney.com/tomorrowland.

From Disney comes two-time Oscar® winner Brad Bird's riveting, mystery adventure TOMORROWLAND starring Academy Award® winner George Clooney. Bound by a shared destiny, former boy-genius Frank (Clooney), jaded by disillusionment, and Casey (Britt Robertson), a bright, optimistic teen bursting with scientific curiosity, embark on a danger-filled mission to unearth the secrets of an enigmatic place somewhere in time and space known only as TOMORROWLAND What they must do there changes the world-and them-forever.

Featuring a screenplay by "Lost" writer and co-creator Damon Lindelof and Brad Bird, from a story by Lindelof & Bird & Jeff Jensen, TOMORROWLAND promises to take audiences on a thrill ride of nonstop adventures through new dimensions that have only been dreamed of.

NO PURCHASE NECESSARY. Must be 13 years of age or older to receive passes. Employees of all promotional partners and their agencies are not eligible. Void where prohibited. Entries must be received by 11:59 PM, May 17th, 2015 to be eligible to receive passes. Sponsors not responsible for incomplete, lost, late or misdirected entries or for failure to receive entries due to transmission or technical failures of any kind. Winners will be chosen at random and mailed their passes. SEATING IS LIMITED, SO ARRIVE EARLY. PASS DOES NOT GUARANTEE A SEAT AT THE SCREENING.