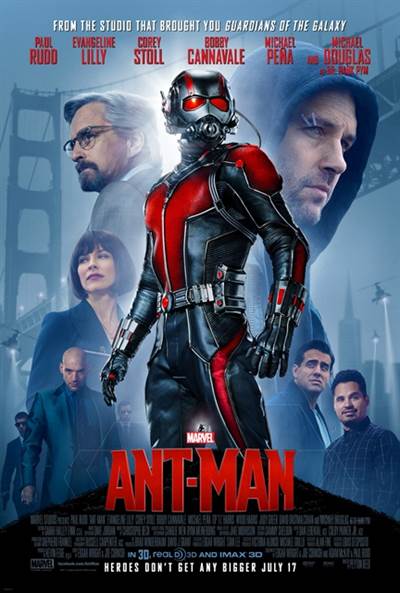 Marvel's ANT-MAN is coming to a theater near you in 3D, RealD 3D and IMAX 3D on July 17 but you can enter for a chance to win complimentary passes for two to the IMAX 3D Advance Screening.

Enter by downloading the Movie Hype App and "following" ANT-MAN. Be sure to tell us what you would do if you had ANT-MAN's strength and small stature with the hashtag #contest. We will choose the best, most original entries to win complimentary passes to see ANT-MAN on Monday, July 13, 2015 at 7:30pm at Cinemark Boynton Beach before it opens nationwide.

Contest ends July 10, 2015. For more information please visit the ANT-MAN movie page on FlickDirect.com or the official website at  http://marvel.com/antman

The next evolution of the Marvel Cinematic Universe brings a founding member of The Avengers to the big screen for the first time with Marvel Studios' ANT-MAN.  Armed with the astonishing ability to shrink in scale but increase in strength, master thief Scott Lang must embrace his inner-hero and help his mentor, Doctor Hank Pym, protect the secret behind his spectacular Ant-Man suit from a new generation of towering threats. Against seemingly insurmountable obstacles, Pym and Lang must plan and pull off a heist that will save the world.

NO PURCHASE NECESSARY. Limit two (2) admit-one passes per person. This film is not yet rated. Must be 13 years of age to receive pass. Employees of all promotional partners and their agencies are not eligible. Void where prohibited. Entries must be received by 11:59pm, July7, 2015 to be eligible to receive pass. Winners will be contacted via e-mail to receive their pass. Sponsors are not responsible for incomplete, lost, late or misdirected entries or for failure to receive entries due to transmission or technical failures of any kind. SEATING IS LIMITED, SO ARRIVE EARLY. PASS DOES NOT GUARANTEE A SEAT AT THE SCREENING.