Win Complimentary Passes For Two To An Advance Screening of Universal Pictures, Despicable Me 3 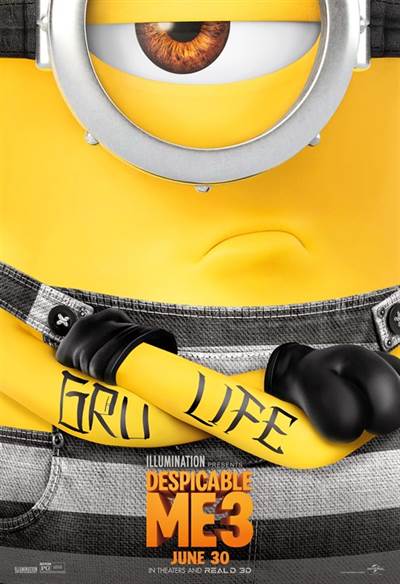 When Despicable Me came to theaters in 2010, no one could have predicted the franchise it would become. It not only warranted a sequel in 2013 but two spinoff movies starring those adorable, little,  yellow guys - the minions.  The movie and the minions also have spawned merchandising opportunities galore and there is even a ride at Universal Orlando Resort.  Finally, just in time for summer vacation, the third installment, DESPICABLE ME 3 is heading to theaters.

Universal Pictures and FlickDirect would like to give some lucky winners the chance to win passes to a special advance screening of DESPICABLE ME 3 before it opens in Theaters on June 30, 2017.

To enter simply subscribe to our FlickDirect YouTube channel and send an email to contest@flickdirect.com (Subject: Despicable Me 3 Contest) with your YouTube Username for verification. We will choose winners at random to receive one admit two passes to the screening on Tuesday, June 27, 2017, at Cinemark Boynton Beach at 7 pm.

Illumination, who brought audiences Despicable Me and the biggest animated hits of 2013 and 2015, Despicable Me 2 and Minions, continues the adventures of Gru, Lucy, their adorable daughters-Margo, Edith and Agnes-and the Minions in Despicable Me 3.  Directed by Pierre Coffin and Kyle Balda, co-directed by Eric Guillon and written by Cinco Paul & Ken Daurio, the animated film is produced by Illumination's Chris Meledandri and Janet Healy, and executive produced by Chris Renaud.

Joining Steve Carell and Kristen Wiig in Despicable Me 3 is Emmy, Tony and Grammy Award winner Trey Parker, co-creator of Comedy Central's global phenomenon South Park and the Broadway smash The Book of Mormon.  Parker voices the role of villain Balthazar Bratt, a former child star who's grown up to become obsessed with the character he played in the ‘80s and proves to be Gru's most formidable nemesis to date.

NO PURCHASE NECESSARY. Limit one (1) admit-two pass per person. This film is rated PG.  Must be 13 years of age or older to win passes. Employees of all promotional partners and their agencies are not eligible. Void where prohibited. Entries must be received by 11:59 pm on June 24, 2017, to be eligible to receive a pass. Winners will be contacted via e-mail to receive their pass. Sponsors not responsible for incomplete, lost, late or misdirected entries or for failure to receive entries due to transmission or technical failures of any kind. SEATING IS LIMITED, SO ARRIVE EARLY. PASS DOES NOT GUARANTEE A SEAT AT THE SCREENING. Refer to screening pass for further restrictions. ONE ENTRY PER PERSON.