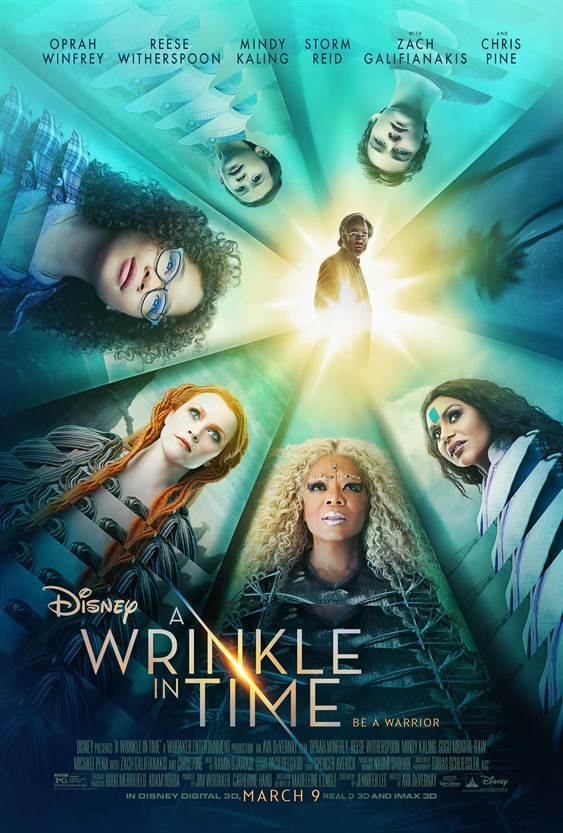 In 1962 author Madeleine L'Engle's science fiction novel A Wrinkle in Time was first published.  Winning numerous literary awards it captured the reader's imagination. In 2003 Disney adapted the book into a television movie and now they have once again reimagined it for theatrical release.

Flick Direct wants to give a few lucky individuals the chance to see Disney's A WRINKLE IN TIME and South Floridians can win passes to a Special Advance Screening before it opens nationwide in theaters on March 9, 2018!

Enter for your chance to win passes to a Special Advance Screening of A WRINKLE IN TIME by simply liking the FlickDirect Facebook page and send an email to contest@flickdirect.com (Subject A WRINKLE IN TIME Contest) with your Facebook username for verification. We will choose winners at random to receive one admit-two pass to A WRINKLE IN TIME on Tuesday, March 6, 2018, at 7:30 pm at AMC Pompano Beach 18 in Pompano Beach, FL.

From visionary director Ava DuVernay comes Disney's A WRINKLE IN TIME an epic adventure based on Madeleine L'Engle's timeless classic which takes audiences across dimensions of time and space, examining the nature of darkness versus light and, ultimately, the triumph of love. Through one girl's transformative journey led by three celestial guides, we discover that strength comes from embracing one's individuality and that the best way to triumph over fear is to travel by one's own light.

Meg Murry is a typical middle school student struggling with issues of self-worth who just wants to fit in. The daughter of two world-renowned physicists, she is intelligent and uniquely gifted, as is Meg's younger brother, Charles Wallace, but she has yet to realize it for herself. Complicating matters is the mysterious disappearance of Mr. Murry, which has left Meg devastated and her mother broken-hearted. Charles Wallace introduces Meg and her fellow classmate Calvin to three celestial beings (Mrs. Which, Mrs. Whatsit and Mrs. Who) who have journeyed to Earth to help search for their father, and together they embark on their formidable quest. Travelling via a wrinkling of time and space are known as tessering, they are transported to worlds beyond their imagination where they must confront a powerful evil force. To make it back home to Earth, Meg must face the darkness within herself in order to harness the strength necessary to defeat the darkness rapidly enveloping the Universe.

Directed by Oscar® nominee Ava DuVernay from a screenplay by Oscar-winner Jennifer Lee based upon the beloved novel by Madeleine L'Engle, "A Wrinkle in Time" stars: two-time Academy Award® nominee

Contest ends March 3, 2018. For more information please visit the A WRINKLE IN TIME movie page on FlickDirect or the official website at movies.disney.com/a-wrinkle-in-time

NO PURCHASE NECESSARY. Limit one (1) admit-two pass per person. This film is rated PG. Must be 13 years of age or older to win passes. Employees of all promotional partners and their agencies are not eligible. Void where prohibited. Entries must be received by 11:59 pm on March 3, 2018, to be eligible to receive a pass. Winners will be contacted via e-mail to receive their pass. Sponsors not responsible for incomplete, lost, late or misdirected entries or for failure to receive entries due to transmission or technical failures of any kind. SEATING IS LIMITED, SO ARRIVE EARLY. PASS DOES NOT GUARANTEE A SEAT AT THE SCREENING. Refer to screening pass for further restrictions. ONE ENTRY PER PERSON.

Get The App!
Filed Under: contest, giveaway, a wrinkle in time, flickdirect florida