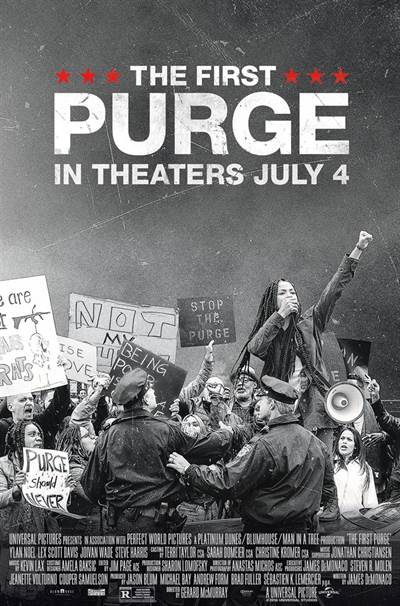 One day a year in the United States there are no laws. Everything is legal…including murder.  In 2013 the very idea enthralled audiences and The Purge franchise was born.  This summer the fourth installments takes us back to the beginning in THE FIRST PURGE.  Universal Pictures along with FlickDirect are offering some lucky winners passes to a complimentary screening before the movie is released nationwide.

To enter simply subscribe to the Movie Hype YouTube channel and send an email to contest@flickdirect.com (Subject: THE FIRST PURGE Contest) with your YouTube username for verification.    We will choose entries at random to win one admit-two pass to see THE FIRST PURGE on  Monday, July 2, 2018, at 7:30 pm at Cinemark Boynton Beach 14 before it opens in theaters On July 4, 2018.

Behind every tradition lies a revolution.  This Independence Day, witness the rise of our country's 12 hours of annual lawlessness.  Welcome to the movement that began as a simple experiment: The First Purge.

To push the crime rate below one percent for the rest of the year, the New Founding Fathers of America (NFFA) test a sociological theory that vents aggression for one night in one isolated community.  But when the violence of oppressors meets the rage of the marginalized, the contagion will explode from the trial-city borders and spread across the nation.

The First Purge is directed by Gerard McMurray (Burning Sands), working from a screenplay once again written by DeMonaco.

Rated R (Restricted - Under 17 Requires Accompanying Parent or Adult Guardian) for strong disturbing violence throughout, pervasive language, some sexuality and drug use.

NO PURCHASE NECESSARY. Limit one (1) admit-two pass per person. This film is rated R.  Must be 17 years of age or older to win passes. Employees of all promotional partners and their agencies are not eligible. Void where prohibited. Entries must be received by 11:59 pm on June 30, 2018, to be eligible to receive a pass. Winners will be contacted via e-mail to receive their pass. Sponsors not responsible for incomplete, lost, late or misdirected entries or for failure to receive entries due to transmission or technical failures of any kind. SEATING IS LIMITED, SO ARRIVE EARLY. PASS DOES NOT GUARANTEE A SEAT AT THE SCREENING. Refer to screening pass for further restrictions. ONE ENTRY PER PERSON.