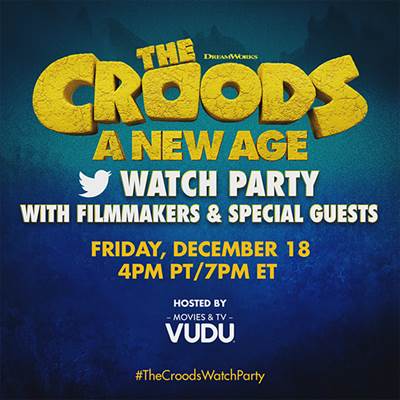 DreamWorks Animation has announced that they will be holding a Twitter watch party for "The Croods: A New Age" tonight at 4 PM PST/7 PM EST. Viewers can watch along with Filmmakers, Cast & Special Guests at WatchCroods.com.

Be sure to tune in 30 minutes prior to the start for a pre-show hosted by Nikki Novak that will include an interview with Director Joel Crawford and special guests as well as a musical performance by Nandi Bushell! The pre-show will be available on the Twitter Event Page.

To get into the spirit, you can even print your own home premiere tickets and set up your own red carpet using The Croods: A New Age Activity Kit!

Be sure to have the whole family join in on the fun during the event!

The film is directed by Joel Crawford, who has worked on multiple DreamWorks Animation films, including Trolls and the Kung Fu Panda franchise, and is produced by Mark Swift (Captain Underpants: The First Epic Movie, Madagascar 3: Europe's Most Wanted).

Filed Under: dreamworks animation, the croods: a new age