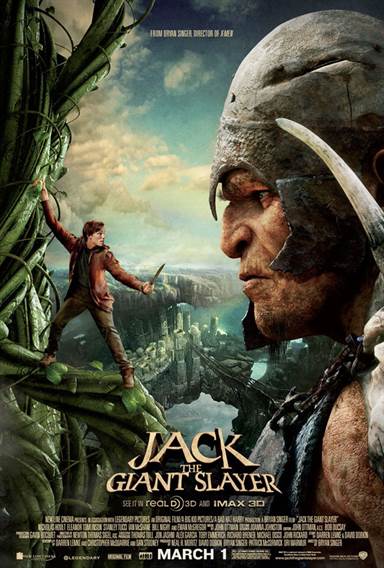 Purchase  DVD/Blu-ray/4K UHD
Taking special effects and sound to a new level for a 3D film, Jack the Giant Slayer entertains with adventure and excitement.  The audience for the film in my estimation targets preteen to 20's male population.  That said, the movie is critic proof with its giant size marketing budget and will certainly make a huge profit in the box-off draw. If you are an adventure film addict and enjoy movies like Journey to the Center of the Earth or 300 than this movie should be on your must see list.

From here the movie gets more adult driven with Jack dropping into the local pub where the entertainment features a lot of ‘fooling' around.  Here he spots King Brahmwell's (Ian McShane) daughter Isabelle (Eleanor Tomlinson) being bothered buy some drunk patrons and comes to her aid. The King's men lead by Elmont (Ewan McGregor) arrives and whisks her away to the castle. Jack leaves the tavern and sells his horse to a Monk (instead of a peddler as you will see why later in the film) for some special mysterious beans.

Jack arrives home and his father gets upset over the beans with one of them dropping through a crack in the floor.  In a rainstorm sometime later he runs into Isabelle who he brings to his house for shelter. When a drop of water hits the bean that fell though the floor an astonishing beanstalk grows carrying off Jack's house with Isabelle inside.

Jack the Giant Slayer has been rated PG-13 by the MPAA for intense scenes of fantasy action violence, some frightening images and brief language.  While I feel that the cut-off for youngsters should go no lower than a mature 11-year-old due to the nature of the violence with some very gruesome visuals, the story, marketing and CGI will determine the age of the audience beyond that group.

Download Jack the Giant Slayer in Digital HD/4K from the iTunes store.

For more information about Jack the Giant Slayer visit the FlickDirect Movie Database.