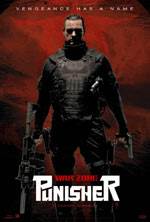 There have been a  lot of rumors swirling around the "Punisher: War Zone" film.  People have said that the film won't be rated "R" and also that Lexi Alexander won't be directing. Well, according to Ain't It Cool News, Steve Gainer, the film's cinematographer, nothing could be further from the truth.  He posted a thread on the Raw Studios message board stating the following:

"Holy smokes, I go away and shoot some kids stuff for Disney, and the whole world is a different color when I return. Again I appear here to dispel rumors. Please believe:

Lexi is not off the film

Lexi is still involved in the edit process

Today I saw a cut that ran 91 minutes

Lexi did in fact get married

Lexi is an incredibly talented director, and this film kicks major ass, as will be proven when it is released IN THEATRES DECEMBER 5th

The film is most certainly not all exploding heads, but will reveal a great deal of Franks persona and pain
This film has been difficult from the beginning, from a bitter Canadian winter, to endless nights, to rampant sickness, Lexi has fought to make a killer Punisher film for fans and non fans alike.
Initially we were to release in September, but for whatever reason (not the quality of the film or edit IMHO) it was decided to release in December. That extra time has given everyone a chance to put their two cents worth in, but rest assured, Lexi is still stearing the boat, and she is a great captain.

When I hear vicious unfounded troll rumors like the "film was unwatchable" or "a total mess" it makes my blood boil. I want to punish the corrupt. People sit on their fat asses trolling the internet, people that have never even looked through a motion picture camera, and make judgements on a work of art that they've never seen, it's like saying a baby will be ugly before it is born, I can't freaking wait for this film to come out and prove the nay-sayers wrong.

Sorry for the rant, I just love something wonderful you have yet to see-

Punisher: War Zone is set to be unleashed in theaters on December 5, 2008.