Another Installment of "Resident Evil" Due Out in 2012 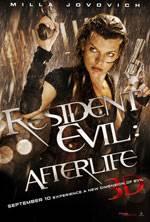 Sony Pictures has announced that they will be releasing a fifth installment of the "Resident Evil" franchise.

Despite mediocre reviews, the franchise has managed to increase sales with each release. Last year's "Resident Evil Afterlife" earned about $10 million more domestically, and approximately $139 million more worldwide, than its previous release.

The fifth installment will be released on September 14, 2012.