Are You Ready For Spartacus: War of The Damned? 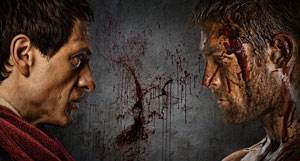 The story of Spartacus is a classic tale and uniquely the same can be said for the TV series inspired by the ancient story. When executive producer Steven DeKnight first came to the project, he knew little about it or even the name. All he did know was that Sam Raimi was attached. Could he have predicted that it would become the most successful series on a network that had just started making its own original programming? Probably not. Could he have foreseen the massive fan attention the show would garner early, bringing it to the forefront of the San Diego Comic-Con? Doubtful. But that is precisely what has happened. Now, after four years and one unfortunate loss (the untimely death of Andy Whitfield, Spartacus from Season 1), the show draws to a close with its final season; War of the Damned.

Before jumping into the end though, let's take a quick look at the inspiration behind the series. Thracian Gladiator, Spartacus, who led a slave uprising against the Roman Republic. The Thracians had been persuaded by Claudius Glaber to serve as auxiliaries in the Roman legions in a campaign against the Getae, who had often plundered Thracian lands. However after Glaber backs out of the deal and switches his attentions from the Getae to attack Mithridates in Asia Minor, the Thracians feel betrayed and mutiny. Captured by Glaber, Spartacus is condemned to death as a Gladiator, whilst his wife Sura is condemned to slavery. Spartacus, however, proves to be a formidable gladiator and defeats the four gladiators tasked with executing him. He becomes a favorite of the crowd, leading Senator Albinius to commute his death sentence to a life of slavery. Spartacus is purchased by Batiatus for gladiator training, who promises to help him find Sura if he proves himself in training. As the series develops, the story follows the betrayals and machinations of Roman life and a tale of one man's heroic quest for vengeance.

We could easily cover all of the past seasons in here, but that would take away from our main focus which is the final season, specifically the first two episodes. As the final season opens, Gaius Claudius Glaber is dead. Its been many months since his defeat and the rebel Army, led by Spartacus (Liam McIntyre) and his generals continues to amass victories over Rome. The rebel armies continue to swell with more and more freed slaves joining the cause. Spartacus is more determined than ever to win and bring down the Roman Republic. Each skirmish they engage brings both sides closer to the inevitable: a full out war!

Spartacus: War of The Damned premieres on Starz on Friday January 25th, 2013

Filed Under: stars, spartacus: war of the damned, spartacus