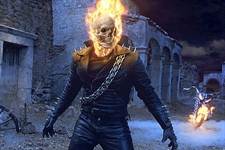 Nicolas Cage, who stars in the "Ghost Rider" franchise was recently asked about the possibility of another film in the future, and the star didn't sound too optimistic.

"I think the ship has sailed on that one. At least with me involved. I've done what I had to do with that part. You never say never, but right now, today, I would say that I'm done."

"Ghost Rider: Spirit of Vengeance", which was released last year, only earned $132 million worldwide. Even though the film budget was $57 million and Sony Pictures made some profit, it wasn't so great that they are rushing to make another.