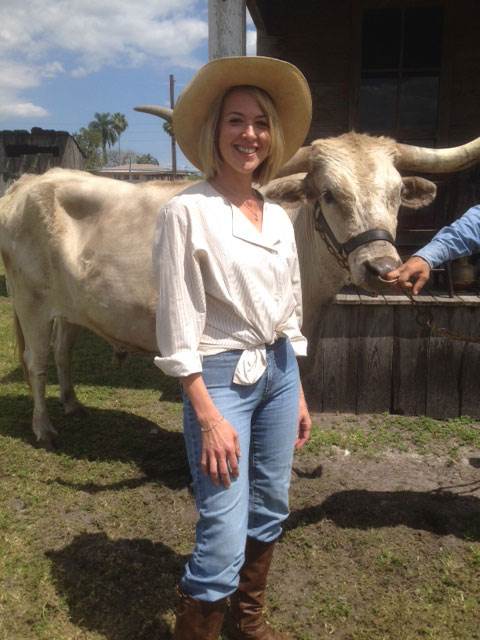 Recently, a spectrum of media luminaries (including yours truly) had the opportunity to visit a prestigious South Florida ranch to ask some probing questions of The Longest Ride author, Nicholas Sparks, and two of Hollywood's rising stars, Britt Robertson (The Longest Ride, Under the Dome) and Scott Eastwood (The Longest Ride, Flags of Our Fathers, Invictus, Gran Torino).

After getting some bull riding pointers from Sugar (see photo), we got to stroll into the saloon (yes, the one from the Timber video) and meet briefly with this giggly trio who at first glean seemed like a cross between The Three Musketeers and The Bopsy Triplets.  As the Q&A round started firing back and forth, it was clear that Nicholas Sparks would be doing much of the answering (as he should), Britt Robertson enthusiastically fielding a few herself, and Scott Eastwood…well,…

For those who don't know, much of his work in front of the camera has been modeling; and, boy, he does it well.  The California native surfer dude son of Clint is seriously apt at striking a pose with just enough flex, flashing a confident smile with an Orbitz-like twinkle in his eye, and shrugging.  Although, I did get a "yeah, uh, well, you know" in the mix of more verbose responses from the others.  (I seriously forgot for a minute that I was not speaking to my five year old and almost ordered him to "use [your] words!")

I asked Nicholas how he was inspired or motivated to include the Judaic element in the movie given that he is Catholic, and all of his works have included Christian-based elements.  (Delighted was I when this question seemed to pleasantly throw him from the now canned through repetition answers.)  He then shared with us the story of his Irish Catholic grandmother who was separated, but could not be divorced without an annulment.  He goes on, "She moved to San Diego, and met a man.  This man…Leo….Leo Robbins [sp?], became my nana's companion.  They lived together, and traveled for more than 20 years."

At this point, Nicholas stifles a giggle, and blushing slightly adds, "Now, understand.  This is my nana.  So, as far as I'm concerned, they were just friends," and warm collective laughter follows from the group.  He continues, "Leo was actually the inspiration for Ira.  Ira is modeled after him; and, Leo was Jewish.  I cared about him very much.  He was a grandfather to me."  It was touching to have this candid moment.  Especially, following what seemed like a tutorial he had to give when asked, "Why did you change how you presented the story from the book, and mix it up instead of telling it at the end?"  (I'll spare you his appropriate "Book to Film 101" response.)

After Britt pondered how much she and her character were alike, she hesitantly replied, "I guess somewhat, sort of. Yeah"!  She was left to blush, humbly nod in agreement and laugh as Nicholas jumped in, "You want to know how much?  She is exactly like Sophia except she is far more energetic…," seemingly tracing her aura with his hands, "as you see her here in person!"  (She is…incredibly energetic, but not in an obnoxious way.  She's charmingly youthful.)

Before they had to rush off to the airport (in three separate black extended SUVs kicking up the dirt making me feel like I was in an episode of Criminal Minds), I asked Britt and Scott if they were ready to be catapulted into the limelight…given their very well choreographed love scenes (I mean really…real shower sex just does not work that way in real life).  Britt was blown away (guffawed), "I'm not expecting anything!"  (See above for Scott's response.) Judith Raymer
It was the classic movies shown Saturdays after the morning cartoon lineup that piqued Judith's curiosity for film. That curiosity would give way to a lifetime of exploration and contribution to media productions of all sorts. After meandering through the worlds of fashion, public relations, advertising, film and television, she produced what would be the greatest passions of her life...Phoenix & Santiago. Six years later, the three would become engaged in daily reenactments primarily from the Marvel world of comic books, TV animations and film. These daily impromptu interpretations would help segue her back to the entertainment industry, and her dedication to "the Bohemian ideals of truth, beauty, freedom, and above all things...love."

Get The App!
Filed Under: interview, scott eastwood, britt robertson, the longest ride