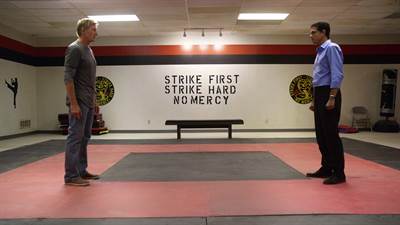 Ahead of the Season 3 debut of Cobra Kai on Netflix, the streamer has announced that that the series has been renewed for a fourth season.

The series, which stars Ralph Macchio and William Zabka, began as a YouTube original and became extremely successful. After YouTube couldn't commit to anything beyond a third season. Sony TV decided to shop elsewhere and landed with Netflix.

"Cobra Kai" takes place 30 years after the events of the "Karate Kid" films. It follows the story of a well-to-do Daniel LaRusso and a struggling Johnny Lawrence.

The third season of "Cobra Kai" will premier on Netflix on January 8, 2021.