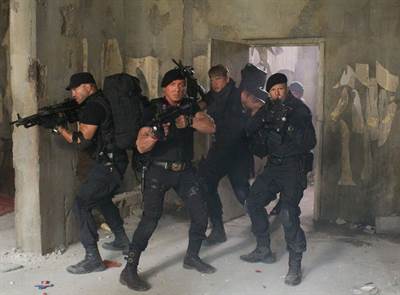 All "Expendables" fans, rejoice! There is a new film in the pipeline.

Jason Statham and Sylvester Stallone are set to return for a fourth franchise installment, along with Dolph Lundgren, and Randy Couture. Newcomers will include 50 Cent, Megan Fox, and Tony Jaa.

Jason Constantine, Lionsgate Motion Picture Group's president of acquisitions and co-productions, said, "We are thrilled to partner with our friends at Millennium Media for the next installment of the ‘Expendables' franchise. It's so much fun to bring these stars together for a no-holds-barred action film. The new film will raise the stakes and be the biggest, most badass adventure yet."

"The Expendables are back, and we couldn't be more excited to bring this star-studded, action-packed film to the big screen with Lionsgate, who have been with us since the inception of this franchise. To keep it fresh and fun, we've added exciting new stars to join the veterans; popcorn entertainment is guaranteed," said Jeffrey Greenstein, Millennium Media president.

The franchise began back in 2010 and has featured numerous action stars including the actors above, as well as Mickey Rourke, Bruce Willis, Arnold Schwarzenegger, Chuck Norris, Terry Crews, Liam Hemsworth, Jean-Claude Van Damme, Antonio Banderas, Jet Li, Wesley Snipes, and Kelsey Grammer. It has earned more than $800 million at the box office.