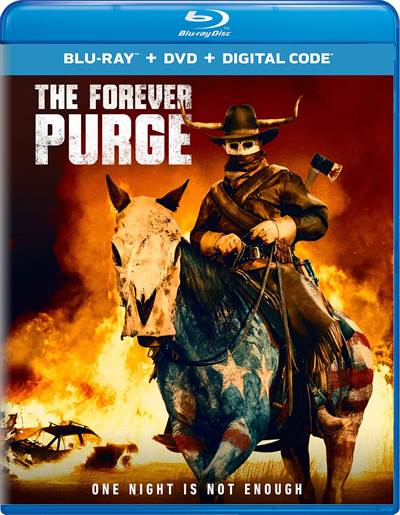 In 2013 The Purge introduced the idea that for one night all crime, including murder, was legal. It was such an intriguing idea that it spawned four sequels.  The latest one, THE FOREVER PURGE, took the concept even further by showing what could happen if some people refused to stop killing.

With the 4K, Blu-ray, and DVD scheduled to be released later this month, Universal Home Entertainment, in conjunction with FlickDirect would like to offer one lucky winner THE FOREVER PURGE Blu-ray combo pack.

To enter for a chance to win THE FOREVER PURGE Blu-ray combo pack follow these easy steps:

This summer, all the rules were broken as a sect of lawless marauders decided that the annual Purge does not stop at daybreak and instead should never end in The Forever Purge.  Vaulting from the record-shattering success of 2018's The First Purge, Blumhouse's infamous terror franchise hurtles into innovative new territory as members of an underground movement, no longer satisfied with one annual night of anarchy and murder, decide to overtake America through an unending campaign of mayhem and massacre. No one is safe.  Adela (Ana de la Reguera, Cowboys & Aliens) and her husband Juan (Tenoch Huerta, Days of Grace) live in Texas, where Juan is working as a ranch hand for the wealthy Tucker family. Juan impresses the Tucker patriarch, Caleb (Will Patton, Halloween), but that fuels the jealous anger of Caleb's son, Dylan (Josh Lucas, Ford v Ferrari).  On the morning after The Purge, a masked gang of killers attacks the Tucker family-including Dylan's wife (Cassidy Freeman, HBO's The Righteous Gemstones), and his sister (Leven Rambin, The Hunger Games), forcing both families to band together and fight back as the country spirals into chaos and the United States begins to disintegrate around them.

RATED R
NO PURCHASE NECESSARY. Limit one Blu-ray combo pack winner.  Must be 17 years of age or older to win. Employees of all promotional partners and their agencies are not eligible. Void where prohibited.  Entries must be received by 11:59 pm on September 27, 2021, to be eligible to enter to win the Blu-ray combo pack. The winner will be contacted via e-mail to receive the Blu-ray combo pack. Sponsors are not responsible for incomplete, lost, late, or misdirected entries or for failure to receive entries due to transmission or technical failures of any kind.  ONE ENTRY PER PERSON.

Filed Under: contest, giveaway, the forever purge, the purge