See an Advance Screening of AMBULANCE in Florida 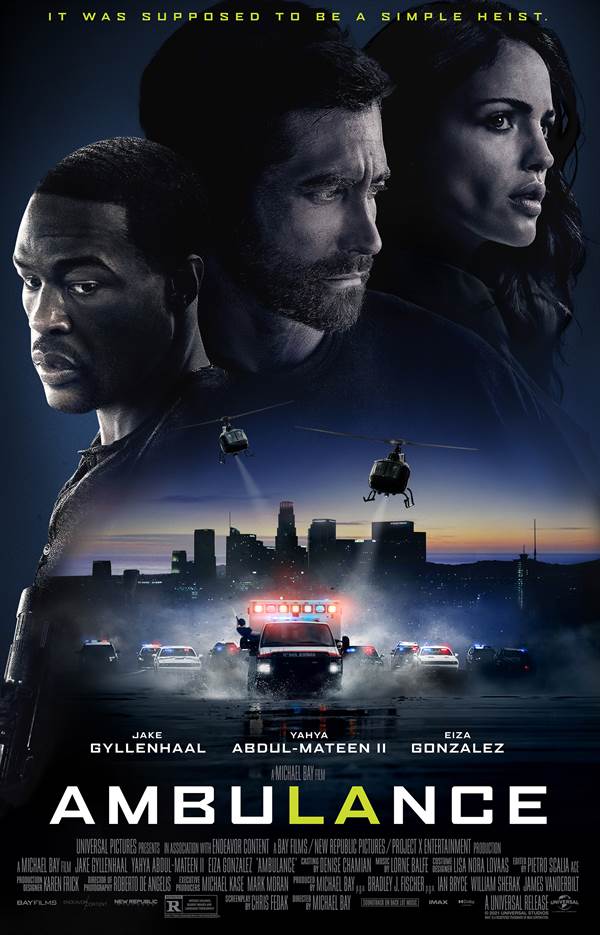 One thing is for certain…if Michael Bay (Transformers) is directing a movie, audiences can generally expect plenty of action and lots of explosions.  Since his latest movie, AMBULANCE, centers around a botched bank heist and a police chase through the streets of Los Angeles, there should be no doubt viewers will be in for some heart-pounding driving with things blowing up all around.

Universal Pictures, in conjunction with FlickDirect, would like to offer some lucky winners one electronic admit-two pass to see an advance screening of AMBULANCE at 7:00 pm on one of the following dates and at one of the following locations: Miami: Wednesday, April 6, 2022 Silverspot Cinema -Downtown Miami;  Orlando: Tuesday, April 5, 2022, Universal Cinemark at Universal CityWalk;  or Tampa: Tuesday, April 5, 2022, AMC Veterans 24 before the film is released in theaters nationwide.

To enter for a chance to win one, admit-two advance screening pass to see AMBULANCE follow these easy steps:

Over one day across the streets of L.A., three lives will change forever.

In this breakneck thriller from director-producer Michael Bay, decorated veteran Will Sharp (Emmy winner Yahya Abdul-Mateen II, Candyman, The Matrix Resurrections), desperate for money to cover his wife's medical bills, asks for help from the one person he knows he shouldn't-his adoptive brother Danny (Oscar® nominee Jake Gyllenhaal, Zodiac, Spider-Man: Far From Home). A charismatic career criminal, Danny instead offers him a score: the biggest bank heist in Los Angeles history: $32 million. With his wife's survival on the line, Will can't say no.

But when their getaway goes spectacularly wrong, the desperate brothers hijack an ambulance with a wounded cop clinging to life and ace EMT Cam Thompson (Eliza González, Fast & Furious Presents: Hobbs & Shaw, Baby Driver) onboard. In a high-speed pursuit that never stops, Will and Danny must evade a massive, city-wide law enforcement response, keep their hostages alive, and somehow try not to kill each other, all while executing the most insane escape L.A. has ever seen.

NO PURCHASE NECESSARY. Limit one pass per household.  Must be 17 years of age or older to win. Employees of all promotional partners and their agencies are not eligible. Void where prohibited.  Entries must be received by 11:59 pm on April 3, 2022, to be eligible to receive a pass. Winners will be contacted via e-mail to receive their electronic passes. Sponsors are not responsible for incomplete, lost, late, or misdirected entries or for failure to receive entries due to transmission or technical failures of any kind.  ONE ENTRY PER PERSON.

Get The App!
Filed Under: contest, giveaway, michael bay, ambulance