See an Advance Screening of KNOCK AT THE CABIN in Florida 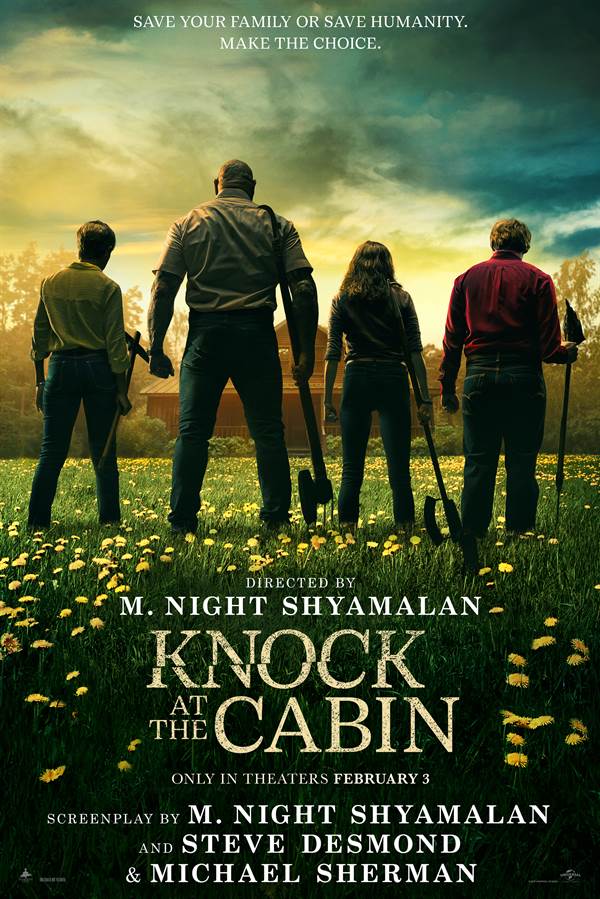 M. Night Shyamalan has always been known for writing and directing thrillers with an unexpected plot twists at the end.  The Sixth Sense, Unbreakable, Signs are all examples of his excellent work in the film industry.  His 2021 release, Old, garnered mixed reviews from critics and audiences but still stayed true to his formula.  This February his newest movie, KNOCK AT THE CABIN, hits theaters with a star-studded cast.

Universal Pictures, in conjunction with FlickDirect, would like to offer some lucky winners one electronic admit-two pass to see an advance screening of  KNOCK AT THE CABIN at 7:00 pm on Tuesday, January 31, 2023 at one of the following locations before it opens in theaters nation wide on February 3, 2023.

To enter for a chance to win one, admit-two advance screening pass to see KNOCK AT THE CABIN follow these easy steps:

NO PURCHASE NECESSARY. Limit one pass per household.  Must be 17 years of age or older to win. Employees of all promotional partners and their agencies are not eligible. Void where prohibited.  Entries must be received by 11:59 pm on January 29, 2023 to be eligible to receive a pass. Winners will be contacted via e-mail to receive their electronic passes. Sponsors are not responsible for incomplete, lost, late, or misdirected entries or for failure to receive entries due to transmission or technical failures of any kind.  ONE ENTRY PER PERSON.

Get The App!
Filed Under: contest, passes, florida, knock at the cabin