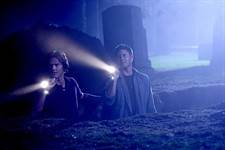 Orlando , FL. - EyeCon has announced four new Supernatural guests to the September 26-28 convention lineup. Jim Beaver, who plays "Bobby Singer" on the show will be appearing as well as Chad Lindberg who plays the popular character "Ash" and Fred Lehne who is the evil "Yellow-Eyed Demon". As for music, EyeCon has signed not one but two musicians, Jason Manns and Steve Carlson who will play live concerts on Friday and Saturday nights, respectively. Negotiations are currently underway with more celebrities.

Jim Beaver plays the role of Bobby Singer on the CW's Supernatural. Bobby is a kind of stand-in father figure for Dean and Sam Winchester, keeping them out of trouble as best as he can. Jim has also starred in many movie and television roles, most notably HBO's Deadwood where he played "Ellsworth".

Fred Lehne plays the role of The Yellow-Eyed Demon on Supernatural. The YED as he has come to be known by fans is responsible for most of the grief faced by the Winchesters in the first two seasons. Fred has starred in a multitude of movies and television series, most recently Lost. This will be Fred's first appearance at EyeCon.

Steve Carlson is a Singer/Songwriter who composed a song for an episode of Supernatural and for the television series Angel. Carlson will be performing a live concert at EyeCon.

Jason Manns is a Singer/Songwriter and a fan favorite for Supernatural fans. Manns will be performing a live concert at EyeCon. This will be Jason's first appearance at EyeCon.

EyeCon is a fan-friendly celebrity autograph convention for Supernatural, sci-fi, horror and comic book fans! For their second event, they are focusing on the hit television series "Supernatural", featuring celebrity guests from the show, Supernatural themed games and panels and lots more.

EyeCon will take place September 26-28, 2008 at the Florida Hotel and Conference Center, located just minutes away from all of the major Orlando attractions including Walt Disney World and Universal Studios! The hotel is gorgeous and the rooms are very comfortable, a perfect place to relax in between convention activities.

EyeCon is in negotiations with some of the top names involved with Supernatural. Expect announcements soon regarding more guests for this year's show.