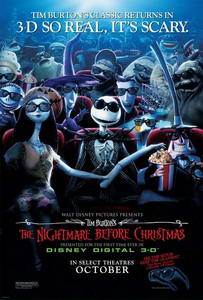 Tim Burton's holiday classic, THE NIGHTMARE BEFORE CHRISTMAS, makes a return to the big screen this holiday season in stunning Disney Digital 3D™.  The dazzling new make-over of the  musical-fantasy was led by the film's original filmmaking team of Academy Award® nominated writer/producer Tim Burton ("Charlie and the Chocolate Factory," "Corpse Bride") and director Henry Selick ("James and the Giant Peach") as well as the talented technical wizards at Industrial Light + Magic.  Audiences will get closer than ever to Halloweentown's beloved Pumpkin King, Jack Skellington (voiced by CHRIS SARANDON), as he attempts to take over the Christmas holiday.  Against the advice of Sally (voiced by CATHERINE O'HARA), a lonely rag doll who has feelings for him, Jack enlists three mischievous trick-or-treaters – Lock, Shock, and Barrel – to help him kidnap Santa Claus.  Jack eventually realizes his mistake but has to contend with the evil Oogie Boogie before he can make things right and restore the Christmas holiday.  Fueled by an unforgettable Grammy® nominated soundtrack featuring ten ghoulishly delightful songs by Oscar® nominee Danny Elfman ("Corpse Bride," "Big Fish") who also provided the singing voice for Jack, Tim Burton's THE NIGHTMARE BEFORE CHRISTMAS 3D combines the Oscar® nominated artistry of stop-motion animation with brand new state-of-the-art digital technology to create a unique and entertaining movie-going experience that is sure to become a modern holiday tradition. For more information visit the official site at www.Nightmare3DMovie.com

The two disc soundtrack for TIM BURTON'S THE NIGHTMARE BEFORE CHRISTMAS IN DISNEY DIGITAL 3D will include Danny Elfman's original score, as well as a second disc featuring covers of the movie's popular songs by some of today's hottest artists.  The artists and tracks will include Fall Out Boy ("What's This?"), Panic! at the Disco ("This Is Halloween"), Marilyn Manson ("This Is Halloween"), Fiona Apple ("Sally's Song") and She Wants Revenge ("Oogie Boogie's Song"), as well as two demo versions of Danny Elfman's "Making Christmas" and "Oogie Boogie's Song."  The album will be available on October 24, 2006.