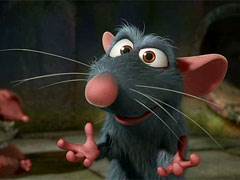 Ratatouille had a bit of a sneak preview at WonderCon in San Francisco this past weekend. The movie is about a rat named Remy (played by Patton Oswald) who dreams of becoming a fine gourmet chef and is guided by his hero, a deceased French cook, Auguste Gusteau (played by Brad Garret).

The Disney/Pixar team released the clip showing how Remy and Linguini, a garbage boy, begin their friendship... all from a simple accident. Linguini knocks over a pot of soup, and while Remy was outside looking in on this situation, he falls through a skylight. Remy then decides that instead of running away, he will help and make the soup taste better. Linguini is thought to have created this great soup, and he and Remy decide that they will work together as a chef. All of this, while trying to hide the who Remy is.

Ratatouille will be premiering on June 29.