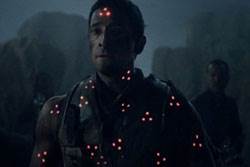 Robert Rodriguez sat down with MTV news a few weeks ago to discuss the recently released "Predators" film. While being interviewed, Rodriguez was asked why a specific scene that was shown in the trailer was left out of the actual film. The scene is question was of Adrien Brody's character being covered in laser gun sights by the Predators. In the film, however, he is covered with a single beam of light.

Rodriguez answered by saying that he had filmed the scene specifically for the trailer, so that people could get a clear idea of the movie's plot, which is humans being hunted by Predators.

"You don't want people to always know. A lot of my movies have trailer shots that I shoot just for the trailer, so that people haven't seen the movie already but they get the feeling of what it's supposed to represent." After pointing out that there is a scene that does deliver a multiple laser sights shot, he said, "It's kind of a good twist to do that. If you go and you think that's what it's going to be, and then it's not that and it ends up happening in another place in the movie."