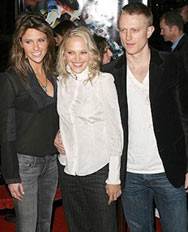 In October of 2006, Neil Jackson who played Marcus Van Sciver on Blade The Series talked with us about his experiences working on Blade and his upcoming projects. Your original profession was an amateur boxing champion. What made you change directions and go into acting? Boxing was more of a hobby for me, though I reached an alright level in the British amateur ranks. I reached a point in my life where I was completing my Master's Degree, boxing and working as a doorman in clubs and not happy. I used to act when I was a kid and realized that was the only time I really enjoyed what I was doing. So I packed it all in pursuit of an acting career...

How did you land your first acting role? I used to write for a production company in London. That's how I put myself through my acting course. They launched a national tour of Miss Julie. I was asked if I wanted to understudy the lead, Freddie Douglas, which I did for nearly six months. I then took over the role when we came into the West End. But my first TV job was through audition. It was to play a boxer, so a bit of a no brainer. The boxing past has probably been to thanks for most of my first jobs.

Were you a fan of the Blade Trilogy before you started on the series? I loved the movies (with the exception of the third one, which was still fun in parts). I remember when Blade came out. It was so fresh and different. I'm working on a thriller called Darkroom at the moment, starring opposite Stephen Dorff, so we've swapped a few Blade tales. He was great in that movie... though I think Marcus would've kicked his ass!

When you read for Blade: The Series was it for Marcus Van Sciver or someone else? Marcus was the only role I was right for and the only role I wanted. They didn't see him as British to start off with, but to me, he was written as nothing but, so I thankfully was able to convince them

Describe your character on Blade: The Series. Marcus was a very bitter, driven vampire. His life was stolen from him along with the love of his life when he was turned. Since that point, he has been in the pursuit of power to throw off the shackles of vampiric life and gain revenge on his superiors.

Has your past work in television and film prepared you for this role, and if so how? I think that every job you do builds and hones your ability, so they have all led me to this point in my career. And the tools I have gained from playing Marcus will, in turn, help in the future.

"I remember when Blade came out. It was so fresh and different."

What was the atmosphere like on the set - was it casual or very professional? Both. We laughed a lot and clowned around, but it was always within the boundaries of professionalism.

What changes would you have liked to see in your character if there was a second season of Blade? Power is an aphrodisiac, and I would like to have seen Marcus become obsessed with his own power. He was so calm and collected in the first season, it would be great to see him lose it a little.

What is your role in your upcoming film "The Thirst"? I play 'Duke', an eighteenth-century fop, turned vampire (seems to be a theme here!). I actually shot this before getting Blade, and they had to release me from shooting early one day to make my meeting with Peter O'Fallan for the role of Marcus.

What was the greatest prank you ever pulled outside Punk'd? I told one of my agents once that Britney Spears was having a lingerie party, and to meet me on the street corner and I would pick him up. He was in his pj's for a while on the corner before he figured out I wasn't picking him up. Pretty mean huh??? 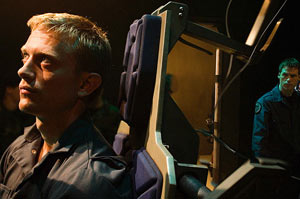 You about to just start principal photography on a new movie called Darkroom. Can you give our readers a sneak preview about what the film will be about? Darkroom is a story about two friends traveling through Morocco. When traveling through Marrakech, LUKE (Stephen Dorff) meets and falls for ZAHRA (Sarai Gavity), a beautiful Moroccan woman. But, despite their connection, such relations are forbidden in her culture. As their feelings escalate, so their actions meet with ever-increasing hostility, until the question is no longer whether they can save their relationship, but whether they can save themselves... I play Adam, who gets caught up in the game xenophobic game that is happening to his friend.

Neil Jackson was born March 5th, 1976, in Luton, England, where he lived until moving to Cardiff at the age of eighteen to study sport at degree level. During his studies, Neil boxed both for the college and for Wales, winning the British Universities Championship twice, leading to his being sponsored to study sport at Masters level.

Upon completion of his MSc, Neil moved to London in April 2000, to pursue acting, enrolling in the Armstrong Acting Academy, a part-time two-year course taught by Michael Armstrong. Neil personal trained to finance himself until graduating from the course in June 2002, and commencing his acting career.