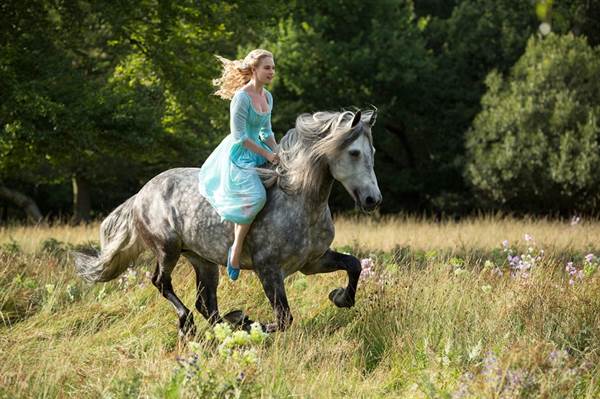 Note: This interview has been edited for clarity, fluidity, and length.

We've grown so accustomed to CGI in today's films that it's easy to dismiss the living, breathing creature characters in Disney's Cinderella. Actually, it is the magic of Guillaume Grange, Head Trainer, and his team which includes some extremely talented (well trained) animals. I recently had the opportunity to chat with Guillaume direct from London, and gain some insight on the mystery man behind the animal talent. Personally, I have a distaste for transatlantic calls, but this one was certainly worth it. Guillaume is delightfully charming, and so passionate about his work. It's clear that he enjoys himself, and feels so rewarded by the animals themselves. It's difficult not to get swept up in it all.

It's likely that he was born with a natural affinity for animals. However, it would be a fateful day attending a bird show (and what followed) that would ignite his life's ambition, and ultimate work. Guillaume recounts having fallen in love, "At the time, I had just been to a bird show; and, a friend said one day, ‘can you come help?'...and, actually, one of the guys from the bird show moved from this place to a total new bedroom in my parents' house." You can almost see the young excited Guillaume when he describes how this "guy" called him, "...and, he called my name. He called me! It was, actually, good luck to avoir [have], and it changed my life." It changed his life, and kick started his career as an animal trainer. He would continue with the bird shows throughout his time at university studying biology and ecology.

Having been enamored, and working with birds for so long, it's easy to presume that they would be his favorite animal with which to work... "Yeah, I've always loved birds...the way they can fly...the freedom...EVERYTHING about them." Other animals have since captured his heart, as well. "I'll always love birds, you know, the way you can try to figure them out. But, I started training birds mostly in the beginning...and, after some time, I worked a lot of different places, and one day, I worked in a zoo. I had the chance to work with patagonian sea lions, and wolves, and pumas...and SNAKES! After a while of working only with birds, that's very nice to have a lot of options of animals; and, I try to work with mammals and reptiles. I kept wondering what it is that comes back from the animals...most of the complex animals...when you work very close to them, what they give you back is something fabulous." To hear him tell it, one can just see his eyes glimmer, then close reflectively. It's enough to make one want to be up close, and an integral part of it all.

When inquiring which has been the greatest challenge to train, "Oh, that's a very good question! The most challenging animal I had to work with my whole life...well, the puma was actually pretty difficult. I would say mostly working with animals that are clever. Like a parrot; because, they actually understand what you want. They love doing EVERything to avoid to do what you want, ‘cause they know what it is, and to avoid it is funny...and, if you don't do it very careful, after a while...actually, the bird is going to train you!" I get momentarily confused thinking he's speaking of my 5 year old, and ask him for tips which gives us both a hearty shared laugh.

Of course, bringing animals onto a film set could be a daunting task. This is "why," Guillaume explains, "we work with animals. Sometimes, we come with animals [that] we've got for a long time. When you've got new animals, it's a bit more difficult, because you have to teach them the trick when they are on the set. Actually, you have to..." he pauses for careful consideration, "the biggest part of the training [is that] you have to understand the cinematic aspects of life where there are a lot of people. If you

want to play on the strengths of the animal, you have to spend a lot of time with them in this once place...bringing a lot of different props. Sometimes you let them move around...and, a little bit of sound, at first. Then, they learn to see a lot of different things. After a while, when they know everything can move all around them, ultimately, at once, they are going to reassert me, and focus more on the trainer. Which is where I come in...which is, then, bring them a lot to the film place, and shoot them as much as we can. That is, actually, that is definitely the point where we can relax, and can meet the schedule. No problem."

Is the old saying about not working with animals (and children) correct? "Well, funny enough," he begins matter-of-factly, "We had that problem with one actress who was a bit scared of dogs... which was a little bit difficult...an actress scared of mice, and she had to hold one! But, actually, she did [so] without too many problems with that. Everybody was actually pretty relaxed...and, I enjoyed the couple...of animals. We got to work on that, actually, train the actor. We spend sometimes several weeks with the actor to make sure the actor knows how to manipulate the animals safely...and, the animals know the actor, too. The animal is going to act very much more natural when they go on the set."

Guillaume offered only a hint of his next exciting project. Movie goers will certainly enjoy whatever he might bring to screen next. I look forward to speaking with him, again, upon its release; delving further into his work with animals. (I plan on brushing up on my french for that conversation.) In the meantime, for anyone that is a fan of Disney...or, animals...or, screen magic, Walt Disney Studios' Cinderella (2015) soon to be released/available on Digital HD, Blu-ray Combo, DVD and On-Demand is a MUST HAVE. In addition to the modern classic, there are plenty of extras including deleted scenes, AND a close-up, personal look at how Guillaume Grange helped the animals (and actors) hone some of the film's most magical moments. Merci, Guillaume!

Get The App!
Filed Under: interview, guillaume grange, cinderella, disney