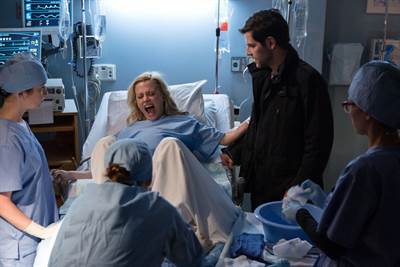 Grimm's fifth season appropriately begins the day before Halloween on NBC at 9pm.  With all the monsters the show has created over the past four years, it makes sense that people would be talking about them on the most monster-celebrating day of the year.   Even more exciting, though, is the "human" drama created when Adalind (Claire Coffee; Franklin and Bash) and Nick (David Giuntoli; Privileged) had a baby last season and fans will surely be tuning in to see what lays ahead for these two.

In anticipation of the premier, Coffee gave some insights into Adelind and what we can expect from her character in Season five.  She told us that Nick and Adalind form a bond and "agree to let bygones be bygones" and while her character has always been his nemesis, this season they must stick together as she is "relying on Nick for protection for the baby".

When asked to elaborate about Adalind's journey this coming season, Coffee responded, "Rollercoaster defines it", which certainly can lead one to believe her character may not stay good for all 22 episodes.  Additionally, she stated, " There are so many things complicating it" and "there has always been a thin line between love and hate" as she spoke about Adalind's and Nick's relationship, and whether or not Adalind would replace the now dead Juliette (Bitsie Tulloch; Parkland) in Nick's life.

On a more personal note, Coffee was more than happy to discuss her real life pregnancy and the birth of her son, Cal.  While she did say being a working mother was "difficult to juggle", overall, being a mom is  "awesome" and that she is, "lucky to bring him on set".  She humorously apologized, as well, claiming if she knew what labor was like last season she would have portrayed Adalind's delivery much differently.

Coffee seemed excited for the changes in her character this season, as Adalind's main goal is keeping the baby safe and being good, which is something new for her especially since her hexenbiest powers are now being suppressed.  She said she really enjoys this new opportunity and likes being able to "shoot with the rest of the cast in Portland" but actually misses Adalind's fashion.

As Grimm will air its 100th episode this season she gushed, "It's unbelievable", "I'm so proud of the show; 100 episodes is an enormous accomplishment these days".  And, of course, she gave credit to the fans for the show's success.

Grimm has so many complex characters and plots, along with a loyal fan base that at this point another 100 episodes doesn't seem out of the realm of possibilities.  However, for now, we'll just watch as season 5 brings changes to the characters and, of course, many , many more monsters.