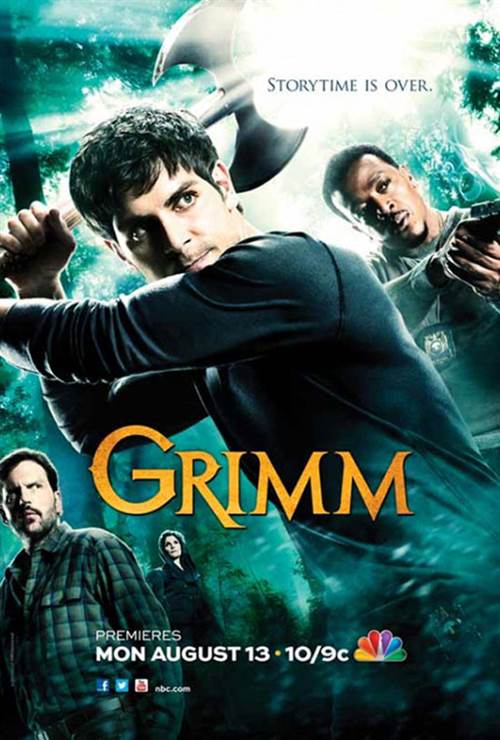 Grimm is a new drama series inspired by the classic Grimm's Fairy Tales. Portland homicide Detective Nick Burkhardt (David Giuntoli, Turn The Beat Around) discovers he is descended from an elite line of criminal profilers known as "Grimms," charged with keeping balance between humanity and the mythological creatures of the world. As he tries to hide the dangers of his new found calling from his fiancé, Juliette Silverton, (Bitsie Tulloch, Quarterlife), and his partner, Hank Griffin (Russell Hornsby, Lincoln Heights), he becomes ever more entrenched in the ancient rivalries and alliances of the Grimm world. With help from his confidant, Monroe (Silas Weir Mitchell, Prison Break), a reformed Grimm creature himself, Nick must navigate through the forces of a larger-than-life mythology, facing off with Hexenbiests, Blutbads and all manner of ancient evils, including royal lines dating back to the original profilers themselves, The Grimm Brothers. Reggie Lee (Persons Unknown) and Sasha Roiz (Caprica) also star.


Grimm Spinoff in the Works at NBC  10/16/2018 2:44 PM EST
Grimm, the NBC series that aired its finale March of last year, will be seeing a spinoff. This time, the story will be centered on a female lead. It is said that there may be some characters from the original series returning for either regular or re... | Full Article

Claire Coffee Discusses Grimm's Fifth Season  10/30/2015 11:32 AM EST
Grimm's fifth season appropriately begins the day before Halloween on NBC at 9pm.  With all the monsters the show has created over the past four years, it makes sense that people would be talking about them on the most monster-celebrating day of the ... | Full Article