Win Complimentary Passes for two to a 3D Advance Screening of Disney's Pirates of The Caribbean: Dead Men Tell No Tales 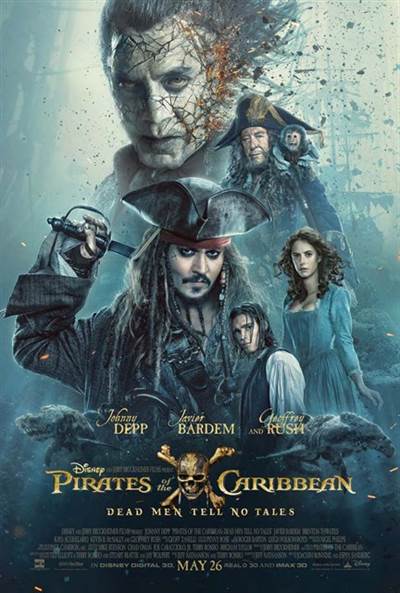 Fourteen years ago the saga that is Pirates of the Caribbean began (if you don't count the amusement park ride) and this May it will all come to a glorious end with the final installment in the series, PIRATES OF THE CARIBBEAN: DEAD MEN TELL NO TALES. Disney along with Flick Direct want to give a few lucky individuals the chance to see the film before it opens nationwide and South Floridians can win complimentary passes to a Special 3D Advance Screening.

Contest ends May 21, 2017, 11:59 EST. For more information please visit the PIRATES OF THE CARIBBEAN: DEAD MEN TELL NO TALES movie page on FlickDirect.com or the official website at Pirates.Disney.com.

Johnny Depp returns to the big screen as the iconic, swashbuckling anti-hero Jack Sparrow in the all-new PIRATES OF THE CARIBBEAN: DEAD MEN TELL NO TALES. The rip-roaring adventure finds down-on-his-luck Captain Jack feeling the winds of ill-fortune blowing strongly his way when deadly ghost sailors, led by the terrifying Captain Salazar (Javier Bardem), escape from the Devil's Triangle bent on killing every pirate at sea-notably Jack. Jack's only hope of survival lies in the legendary Trident of Poseidon, but to find it he must forge an uneasy alliance with Carina Smyth (Kaya Scodelario), a brilliant and beautiful astronomer, and Henry (Brenton Thwaites), a headstrong young sailor in the Royal Navy. At the helm of the Dying Gull, his pitifully small and shabby ship, Captain Jack seeks not only to reverse his recent spate of ill fortune but to save his very life from the most formidable and malicious foe he has ever faced.

NO PURCHASE NECESSARY. Limit one (1) admit-two pass per person. This film is rated PG-13. Must be 13 years of age or older to win passes. Employees of all promotional partners and their agencies are not eligible. Void where prohibited. Entries must be received by 11:59 pm, May 21, 2017, to be eligible to receive a pass. Winners will be contacted via e-mail to receive their pass. Sponsors not responsible for incomplete, lost, late or misdirected entries or for failure to receive entries due to transmission or technical failures of any kind. SEATING IS LIMITED, SO ARRIVE EARLY. PASS DOES NOT GUARANTEE A SEAT AT THE SCREENING. Refer to screening pass for further restrictions. ONE ENTRY PER PERSON.