Pirates of The Caribbean: Dead Men Tell No Tales (2017) 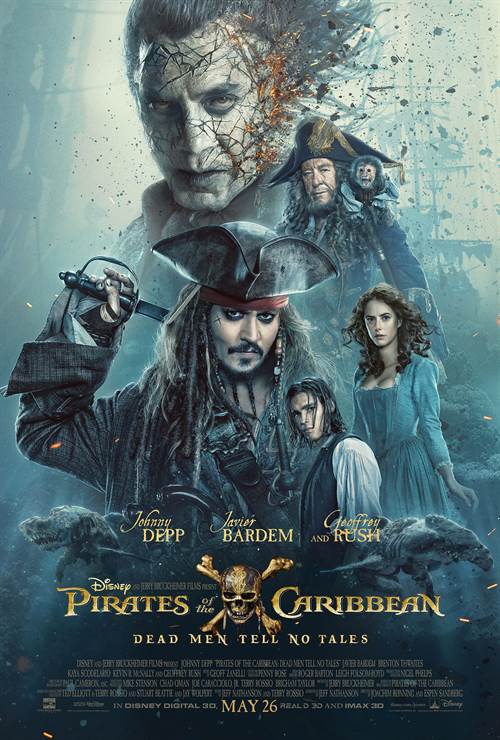 Thrust into an all-new adventure, a down-on-his-luck Captain Jack Sparrow finds the winds of ill-fortune blowing even more strongly when deadly ghost pirates led by his old nemesis, the terrifying Captain Salazar (Bardem), escape from the Devil's Triangle, determined to kill every pirate at sea...including him. Captain Jack's only hope of survival lies in seeking out the legendary Trident of Poseidon, a powerful artifact that bestows upon its possessor total control over the seas.

Download Pirates of The Caribbean: Dead Men Tell No Tales in Digital HD/4K from the iTunes store.


Disney Looking to Reboot Pirates of the Caribbean Franchise  10/24/2018 12:15 PM EST
Disney is looking for a possible reboot of its Pirates of the Caribbean franchise. Meetings have already been held with Rhett Reese & Paul Wernick, the writers for the first two Deadpool films, to discuss the project.The film will still have Jerry Bruckheimer on board as the producer for the franchise but no word yet on who else, if anyone, would return. It's entirely possible that the new films w...  More>>

Win Complimentary Passes for two to a 3D Advance Screening of Di...  5/17/2017 4:04 PM EST
Fourteen years ago the saga that is Pirates of the Caribbean began (if you don't count the amusement park ride) and this May it will all come to a glorious end with the final installment in the series, PIRATES OF THE CARIBBEAN: DEAD MEN TELL NO TALES. Disney along with Flick Direct want to give a few lucky individuals the chance to see the film before it opens nationwide and South Floridians can w...  More>>

Pirates of the Caribbean Film Being Held Ransom by Hackers  5/15/2017 10:38 PM EST
In this day and age, technology infiltrates almost every aspect of our lives. And in an odd turn of events, Disney's "Pirates Of The Caribbean: Dead Men Tell No Tales" has become the victim of this infiltration.  Hackers have taken the film and are demanding that Disney pays ransom in order to get the film back.  Disney is currently working with the FBI to bring and end to this situation.Originall...  More>>

Johnny Depp Signs Deal For Fifth Pirate Film  8/21/2012 1:59 PM EST
It seems a fifth installment of the highly popular "Pirates of the Caribbean" franchise is not to far away on the horizon. It has been reported that Johnny Depp has signed on for a fifth movie.According to sources, he is expecting to pick up a whopping $100 million pay-check to reprise the role of the eccentric pirate Captain Jack Sparrow. The Sun claims he has signed on to the movie as a way to f...  More>>

Disney and Jerry Bruckheimer Present “A Pirate's Life For You” W...  5/6/2011 3:01 PM EST
Pirates' fans can help celebrate the 5/7 Disneyland World Premiere of Pirates of the Caribbean: On Stranger tides by connecting nationwide on Mobile, Twitter and SCVNGR to win a trove of treasure, including a Disney Cruise to the Mexican Riviera! WHAT: Pirates fans across the country have 3 ways to connect to the Disneyland World Premiere and win Pirates of the Caribbean Prize Packs including Hot ...  More>>

Depp Wants Time Before Next “Pirates” Film  5/5/2011 3:56 PM EST
According to The Hollywood Reporter, a fifth "Pirates of the Caribbean" film is in the works. The script has already been handed in by Terry Rossio, and now it's a waiting game to see when Disney will give the go-ahead.One person hoping it isn't too soon til production is Johnny Depp, who plays Captain Jack Sparrow. While he loves the films, he hopes that there is a bit of a breather between the f...  More>>

Ian McShane "Pirates" Poster Released  3/18/2011 3:36 PM EST
Four new "Pirates of the Caribbean:On Stranger Tides: posters have been released. The latest film in the Disney franchise will be released on May 20, 2011 and will be starring Johnny Depp, of course, as well as Penelope Cruz, Geoffrey Rush and Ian McShane....  More>>

Geoffrey Rush "Pirates" Poster Released  3/18/2011 3:35 PM EST
Four new "Pirates of the Caribbean:On Stranger Tides: posters have been released. The latest film in the Disney franchise will be released on May 20, 2011 and will be starring Johnny Depp, of course, as well as Penelope Cruz, Geoffrey Rush and Ian McShane....  More>>

Penelope Cruz "Pirates" Poster Released  3/18/2011 3:33 PM EST
Four new "Pirates of the Caribbean:On Stranger Tides: posters have been released. The latest film in the Disney franchise will be released on May 20, 2011 and will be starring Johnny Depp, of course, as well as Penelope Cruz, Geoffrey Rush and Ian McShane....  More>> 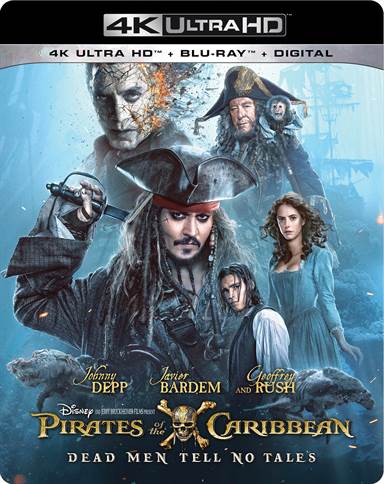 Nostalgically missing my Disney annual passes, my mind wanders back to one of my favorite rides singing Yo ho, yo ho, a pirate's life for me...but if you rode the ride as many times as I have, you would remember the first words you hear after setting sail. Dead Men Tell No Taaaaaaaaaales.

It makes perfect sense that Disney would eventually use it as a title in one of their biggest grossing film series, Pirates of the Caribbean. Even more so, that the film itself would echo that nostalgic tone.

The film starts off with young Henry jumping off a boat, with rocks tied to his leg, sinking to the bottom of the ocean, landing on the Flying Dutchman and telling his father Will Turner (Orlando Bloom; The Lord of the Rings Trilogy) that he will free Will from the curse that keeps him on the Dutchman with a treasure he read about….Poseidon's Trident.

Nine years later Henry's Captain sails into the Devil's Triangle and is attacked by Captain Salazar (Oscar Award Winner Javier Bardem; No Country For Old Men) and his crew of the dead. Henry, who's in the brig at the moment, comes face to face with Captain Salazar, and the captain tells Henry he has nothing to worry about because he always leaves someone alive to tell the tale. He also asks Henry to give a message to Jack Sparrow (Johnny Depp: Edward Scissorhands)… "Death will come straight to him'.  Of course, he would tell Sparrow himself, but alas dead men tell no tales (didn't see that coming did you?).

Elsewhere, no man nor army has ever stolen the gold from St. Martin and yet while showing off the unbreakable safe, they open it to find Jack Sparrow, and he is not alone. Jack's crew then, while trying to hijack the safe, actually pulls the whole Bank from its foundation, dragging it through the streets of St Martin with Jack dragging behind. During the chase, Jack briefly meets Carina Smyth (Kaya Scodelario; The Maze Runner series) and helps her escape from her own troubles (accused of being a "witch" is never easy). The heist didn't go as planned and his crew turn their backs on Jack. Jack trades his trusty compass for a bottle of rum at one of the local taverns and that action unlocks Captain Salazar from his cursed prison. He is now on the hunt for Sparrow!

Captain Hector Barbosa (Oscar Award winner Geoffrey Rush; Shine, The Kings Speech) makes a deal with a witch that gives him Jack's Compass and he then decides to make a deal with the dead Captain Salazar…."I can find Jack if you let me live".

Once again Jack Sparrow is captured and sentenced to die in the courtyard with young Carina as well, but Young Henry Turner (Brenton Thwaites; Maleficent, Gods of Egypt) steps in and, in a wild sequence, help the two escape death, with an assist from Jack's Crew. Once free, the three team up with hopes of finding the greatest treasure, Poseidon's Trident.

Even the soundtrack, from the opening sequence with young Henry, echoes the love theme when we saw Turner kiss Swan in Pirates of the Caribbean: At World's End. While this is the first Pirates film without the great Hans Zimmer (Sherlock Holmes) at the helm…Geoff Zanelli (one of Zimmer's protégés) did wonders keeping the soundtrack alive and fresh while making it nostalgic as well.

Personally, the previous installment, Pirates of the Caribbean: On Stranger Tides wasn't one of my favorites. It sailed off in a completely different direction and honestly, that may have been just what was needed, so that once we went back to these original characters, it would create that warm feeling in our hearts. As the saying goes, "you have to lose some things to give you the opportunity to miss them".

I give mad props to the special effects department!! What they did with Captain Salazar and his crew, from the floating hair to the crewmembers missing limbs were just truly badass! The 2160p High Definition video quality of the 4K Blu-ray make these features stand out beautifully and simply give the whole film a sharpness and vibrancy that is outstanding.  The Dolby Atmos audio is not to be rivaled and showcases the aforementioned soundtrack.  There is also a well-done mix of dialogue, soundtrack and effect and nothing overpowers the other.

The 4k Edition is LOADED with Special Features!! Hours of fun stuff to watch…they include:

I give "Pirates of the Caribbean: Dead Men Tell No Tales" 5 Gold doubloons of 5! If you're a Pirates fan, then this should be in your collection for sure! Oh and By The way….make sure you watch till the end of the credits. There's a bonus scene that may have just dictated Pirates 6!.....Drink up me 'earties, yo ho.
Yo ho, yo ho, a pirate's life for me!