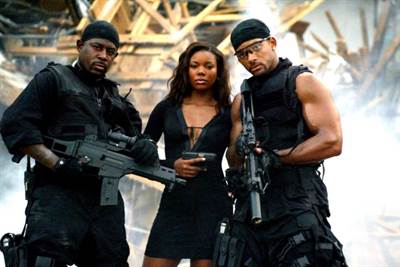 It has been reported that a TV series spinoff to the Bad Boys franchise will be released starring Gabrielle Union, who appeared in the second film of the franchise.

Union's character is Special Agent Sydney "Syd" Burnett, who is not only Marcus Burnett's (Martin Lawrence) sister but the love interest of Marcus' partner Mike Lowrey (Will Smith).

The series comes from Bad Boys movies' producer Jerry Bruckheimer, Doug Belgrad through his 2.0 Entertainment banner and Primary Wave Entertainment. The script is being written by Brandon Margolis and Brandon Sonnier (The Blacklist writers/producers).  Belgrad and Jerry Bruckheimer TV's Bruckheimer, Jonathan Littman and KristieAnne Reed will also be executive producing.

Gabrielle Union stars in BET's Being Mary Jane, which will be ending its run next year.