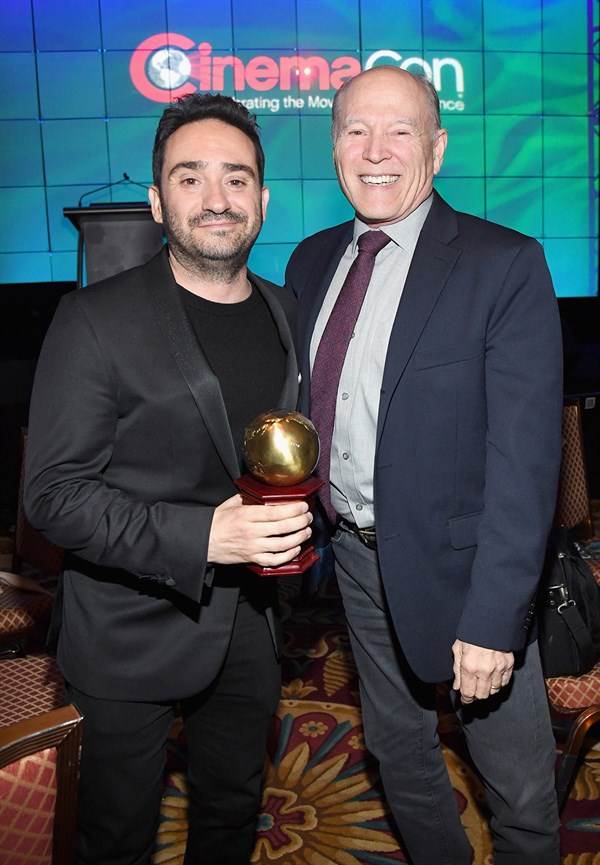 As in years past, Cinemacon 2018 opened on Monday, April 23, 2018, with what is referred to as  International Day.   Once again housed in Las Vegas, the convention brings the movie studios, tradespeople, and theaters owners together to preview the latest offerings in film and concessions.  Off to a great start, the offerings on the first day included a variety of sessions and award and provided a sneak preview of whats yet to come.

International Day began with a breakfast and keynote address.  Sponsors DTS Inc./Xperi and GDC Technology each spoke briefly about what their company provides and what is in store in the future.  Next on the bill was CEO of CJ CGV, Jeong Seo, and Chairman/CEO of Global Road Entertainment, Rob Friedman.  Both gentlemen emphasized the growth and development of International cinema distribution and the quickly expanding theater ownership market throughout the globe.

Following the breakfast, attendees moved to a different conference hall for a variety of presentations.  The first speaker was President of Convince and Convert, Jay Baer, who discussed the simple yet often overlooked concept of excellence in customer service. Extracting excerpts from his bestseller Hug Your Haters: How to Embrace Complaints and Keep Your Customers he offered theater owners concrete examples of how to use customer complaints to their advantage.  A humorous and dynamic speaker his thirty-minute presentation offered useful tools that can be used in any type of industry.

Next were three short presentations beginning with David Hancock from IHS Markit who discussed the global trends in terms of technology and how it relates to theater ownership. After him ANCINE President, Christian de Castro Oliveira spoke about the Brazilian Cinema industry, which has long been known to be one of the fastest and most important growing international markets. Finally, a panel discussion commenced offering suggestions on how to grow one's business in order to attract new moviegoers.

The final sessions of the day were The Global Cinema Federation: Addressing the issues of the Global Exhibition Industry and The New Frontier: Saudi Arabia opens Doors to Movie Theaters after 35 years.  The former was a one-on-one discussion with Cinepolis CEO and General Director Alejandro Rameriz Maganaand President of UNIC and Chief Executive of the UK Cinema Association, Phil Clapp while the latter panel discussion moderated by President and CEO of NATO, John Fithian.  Both panels were informative and once again reiterated the day's theme of global expansion.

The first day will culminate with a welcome reception, Gala night opening studio event and party.  The Gala opening event will kick off the first of the major movie studio presentations with Sony Pictures highlighting its 2018 summer and fall slate of films.

Cinemacon 2018 seems to be bigger and better than ever with hopes to offer a look at the trends and films coming up throughout the year.

Get The App!
Filed Under: cinemacon, nato, movie theaters