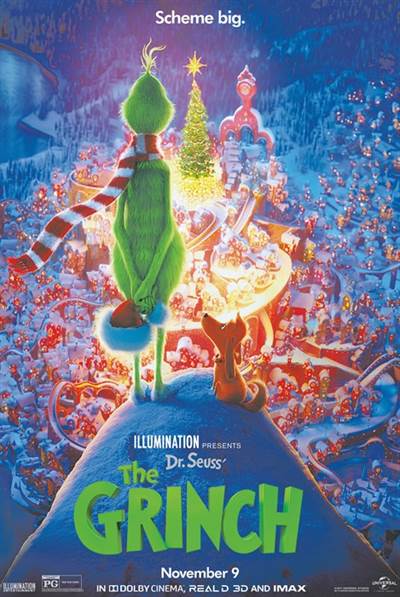 It's that time of year again…the weather is getting colder, the leaves are changing color (well if you live in the northern part of the United States anyway) and people are gearing up for the holiday season including the influx of holiday movies hitting theaters.  One of the animated ones coming this year is Illumination's Dr. Seuss' THE GRINCH and Universal Pictures, in conjunction with FlickDirect, want to give some lucky winners the opportunity to see an Advance Screening of the film before it is released nationwide on November 9, 2018.

To enter simply subscribe to FlickDirect on YouTube and send an email to contest@flickdirect.com (Subject: THE GRINCH Contest) with your username for verification.

We will choose entries at random to win one admit-two pass to see THE GRINCH on Tuesday, November 6, 2018, at 7:00 pm at Cinemark Boynton Beach 14.

Contest ends November 5, 2018. For more information please visit THE GRINCH movie page on FlickDirect or the official website at www.grinchmovie.com.

For their eighth fully animated feature, Illumination, and Universal Pictures present The Grinch, based on Dr. Seuss' beloved holiday classic.  The Grinch tells the story of a cynical grump who goes on a mission to steal Christmas, only to have his heart changed by a young girl's generous holiday spirit.  Funny, heartwarming and visually stunning, it's a universal story about the spirit of Christmas and the indomitable power of optimism.

Academy Award® nominee Benedict Cumberbatch lends his voice to the infamous Grinch, who lives a solitary life inside a cave on Mt. Crumpet with only his loyal dog, Max, for company.  With a cave rigged with inventions and contraptions for his day-to-day needs, the Grinch only sees his neighbors in Who-ville when he runs out of food.

Each year at Christmas they disrupt his tranquil solitude with their increasingly bigger, brighter and louder celebrations.  When the Whos declare they are going to make Christmas three times bigger this year, the Grinch realizes there is only one way for him to gain some peace and quiet: he must steal Christmas.  To do so, he decides he will pose as Santa Claus on Christmas Eve, even going so far as to trap a lackadaisical misfit reindeer to pull his sleigh.

Meanwhile, down in Who-ville, Cindy-Lou Who-a young girl overflowing with holiday cheer-plots with her gang of friends to trap Santa Claus as he makes his Christmas Eve rounds so that she can thank him for help for her overworked single mother.  As Christmas approaches, however, her good-natured scheme threatens to collide with the Grinch's more nefarious one.  Will Cindy-Lou achieve her goal of finally meeting Santa Claus?  Will the Grinch succeed in silencing the Whos' holiday cheer once and for all?

Rated: PG (Parental Guidance Suggested - Some Material May Not Be Suitable for Children) for brief rude humor.

NO PURCHASE NECESSARY. Limit one (1) admit-two pass per person. This film is rated PG.  Must be 13 years of age or older to win passes. Employees of all promotional partners and their agencies are not eligible. Void where prohibited. Entries must be received by 11:59 pm on November 5, 2018, to be eligible to receive a pass. Winners will be contacted via e-mail to receive their pass. Sponsors not responsible for incomplete, lost, late or misdirected entries or for failure to receive entries due to transmission or technical failures of any kind. SEATING IS LIMITED, SO ARRIVE EARLY. PASS DOES NOT GUARANTEE A SEAT AT THE SCREENING. Refer to the screening pass for further restrictions. ONE ENTRY PER PERSON.


Filed Under: contest, giveaway, flickdirect florida, the grinch
Share this: