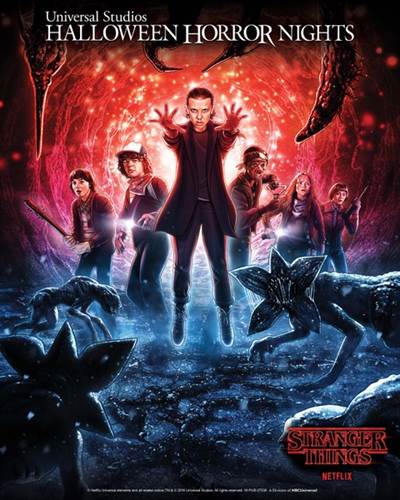 Universal Orlando Resort and Universal Studios Hollywood have released some new artwork for their upcoming "Stranger Things" maze coming to Halloween Horror Nights this fall. The artwork has been released just a few days after Season 3 of the hit Netflix series was launched.

In the artwork, we see the "Stranger Things" cast bravely facing a horrifying monster and ferocious Demodogs - a fate guests will soon experience themselves in the mazes at the nation's premier Halloween events.

The new mazes will pick up where last year's left off. They will both parallel the hit show as it leaps forward to 1985, taking guests on a terrifying excursion through portions of "Stranger Things 3".

For more information, head on over to  www.HalloweenHorrorNights.com.