Win Passes For 2 To An Advance Screening of Disney's Maleficent: Mistress Of Evil 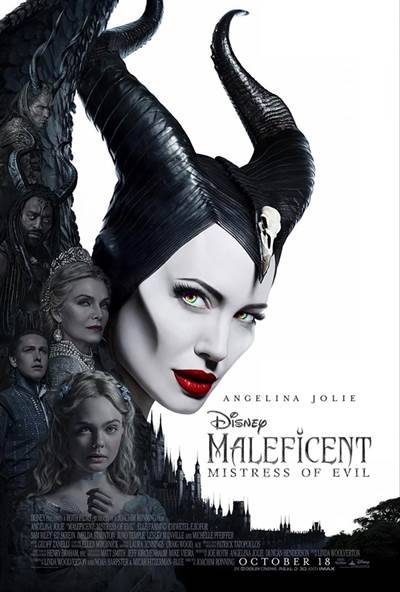 In 2014 the world got to see Angelina Jolie play an evil witch as the role of Maleficent in the movie of the same name.  The live-action adaptation of Disney's animated classic, Sleeping Beauty.  Five years later Jolie will once again take on the dark persona this fall when MALEFICENT: MISTRESS OF EVIL comes to theaters.

FlickDirect, in conjunction with Disney, would like to give some lucky winners the opportunity to see MALEFICENT: MISTRESS OF EVIL on October 14, 2019, in IMAX 2D at AMC Pembroke Lakes at 7:30 pm before it released nationwide on October 18, 2019.

To enter for a chance to win one pass for two to the IMAX® advance screening of Disney's MALEFICENT: MISTRESS OF EVIL follow these easy steps:

In Disney's MALEFICENT: MISTRESS OF EVIL, a sequel to the 2014 global box office hit, Maleficent (Jolie; Girl, Interrupted) and her goddaughter Aurora (Elle Fanning; Super 8) begin to question the complex family ties that bind them as they are pulled in different directions by impending nuptials, unexpected allies, and dark new forces at play. The years have been kind to Maleficent and Aurora. Their relationship, born of heartbreak, revenge and ultimately love, has flourished. Yet the hatred between man and the fairies still exists. Aurora's impending marriage to Prince Phillip (Brenton Thwaites; Titans) is cause for celebration in the kingdom of Ulstead and the neighboring Moors, as the wedding serves to unite the two worlds. When an unexpected encounter introduces a powerful new alliance, Maleficent and Aurora are pulled apart to opposing sides in a Great War, testing their loyalties and causing them to question whether they can truly be family. "Maleficent: Mistress of Evil" stars Angelina Jolie, Elle Fanning, Chiwetel Ejiofor, Sam Riley, Harris Dickinson, Ed Skrein, Imelda Staunton, Juno Temple, Lesley Manville, and Michelle Pfeiffer as Queen Ingrith, and is directed by Joachim Rønning. With a story by Linda Woolverton and a screenplay by Linda Woolverton and Noah Harpster & Micah Fitzerman-Blue, the film is produced by Joe Roth, Angelina Jolie and Duncan Henderson with Matt Smith, Jeff Kirschenbaum, Mike Vieira and Linda Woolverton serving as executive producers.

NO PURCHASE NECESSARY. Limit one admit-two passes per person. This film is rated PG. Must be 13 years of age or older to win passes. Employees of all promotional partners and their agencies are not eligible. Void where prohibited. If an email is received without a comment on the trailer, the entry will be voided and the email deleted.  Entries must be received by 11:59 pm on October 11, 2019, to be eligible to receive a pass. Winners will be contacted via e-mail to receive their pass. Sponsors not responsible for incomplete, lost, late or misdirected entries or for failure to receive entries due to transmission or technical failures of any kind. SEATING IS LIMITED, SO ARRIVE EARLY. PASS DOES NOT GUARANTEE A SEAT AT THE SCREENING. Refer to screening pass for further restrictions. ONE ENTRY PER PERSON.