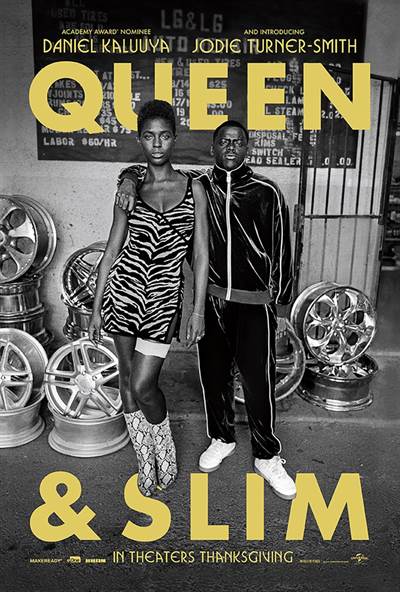 Acclaimed director Melina Matsoukas (Insecure) is making her feature film directorial debut this Fall with her film, QUEEN & SLIM.  With the movie set to open nationwide on November 27, 2019, Universal Pictures, in conjunction with FlickDirect, want to give some lucky winners the chance to win advance screening passes for Cinemark Boynton Beach 14 on Thursday, November 21, 2019, at 7:30 pm.

We will choose entries at random to win one admit-two pass for the screening.

While on a forgettable first date together in Ohio, a black man (Get Out's Daniel Kaluuya) and a black woman (Jodie Turner-Smith, in her first starring feature-film role), are pulled over for a minor traffic infraction. The situation escalates, with sudden and tragic results, when the man kills the police officer in self-defense. Terrified and in fear for their lives, the man, a retail employee, and the woman, a criminal defense lawyer, are forced to go on the run. But the incident is captured on video and goes viral, and the couple unwittingly become a symbol of trauma, terror, grief and pain for people across the country.

As they drive, these two unlikely fugitives will discover themselves and each other in the most dire and desperate of circumstances and will forge a deep and powerful love that will reveal their shared humanity and shape the rest of their lives.

Joining a legacy of films such Set It Off and Thelma & Louise, Queen & Slim is a powerful, consciousness-raising love story that confronts the staggering human toll of racism and the life-shattering price of violence.

NO PURCHASE NECESSARY. This film is rated R.  Must be 17 years old to enter the contest.  Employees of all promotional partners and their agencies are not eligible. Void where prohibited. Entries must be received by 11:59 pm on November 19, 2019, to be eligible.  Winners will be contacted via e-mail to receive their pass. Sponsors not responsible for incomplete, lost, late or misdirected entries or for failure to receive entries due to transmission or technical failures of any kind. SEATING IS LIMITED, SO ARRIVE EARLY. PASS DOES NOT GUARANTEE A SEAT AT THE SCREENING. Refer to screening pass for further restrictions. ONE ENTRY PER PERSON