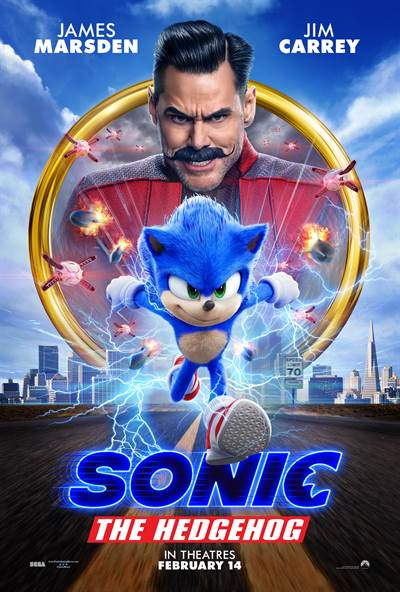 In 1991 SEGA released a game called Sonic the Hedgehog.  The little, blue creature would run around collecting rings and trying to free animals who were imprisoned by Dr. Robotnik.  Because of the game's popularity, the character has become a media franchise with all kinds of merchandise for sale.  However, it has taken almost 30 years for this popular game to be turned into a feature film, which will be coming to theaters this February.

FlickDirect, in conjunction with Paramount Pictures, would like to give some lucky winners the opportunity to see SONIC THE HEDGEHOG on Saturday, February 8, 2020, at AMC Sunset Place at 11:30 am before it released nationwide on February 14, 2020.

To enter for a chance to win one pass for two to the IMAX® advance screening of SONIC THE HEDGEHOG follow these easy steps:

Based on the global blockbuster videogame franchise from Sega, SONIC THE HEDGEHOG tells the story of the world's speediest hedgehog as he embraces his new home on Earth. In this live-action adventure comedy, Sonic and his new best friend Tom (James Marsden; 27 Dresses) team up to defend the planet from the evil genius Dr. Robotnik (Jim Carrey; The Mask ) and his plans for world domination. The family-friendly film also stars Tika Sumpter (Ride Along) and Ben Schwartz (Parks and Recreation) as the voice of Sonic.

NO PURCHASE NECESSARY. Limit one admit-two passes per person. This film is rated PG. Must be 13 years of age or older to win passes. Employees of all promotional partners and their agencies are not eligible. Void where prohibited. If an email is received without a comment on the trailer, the entry will be voided and the email deleted.  Entries must be received by 11:59 pm on February 5, 2020, to be eligible to receive a pass. Winners will be contacted via e-mail to receive their pass. Sponsors not responsible for incomplete, lost, late or misdirected entries or for failure to receive entries due to transmission or technical failures of any kind. SEATING IS LIMITED, SO ARRIVE EARLY. PASS DOES NOT GUARANTEE A SEAT AT THE SCREENING. Refer to screening pass for further restrictions. ONE ENTRY PER PERSON.