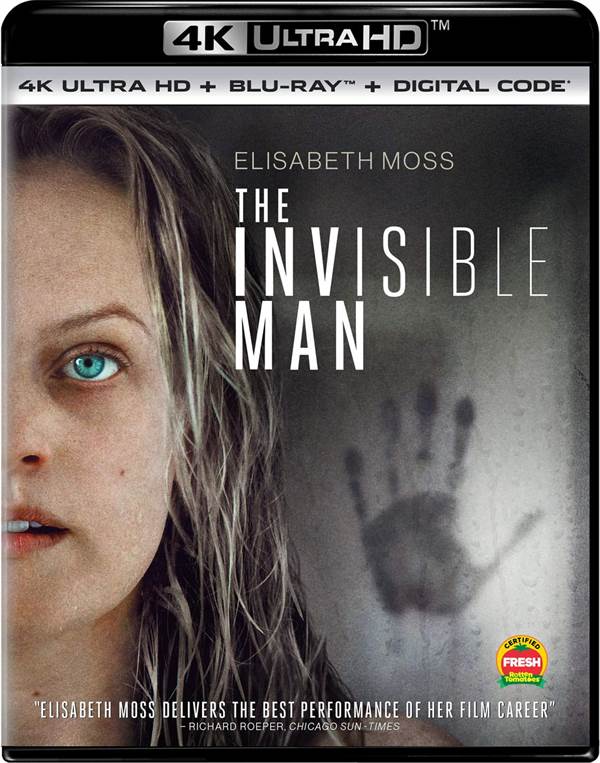 Over 100 years ago H.G. Wells wrote a novel called The Invisible Man about a scientist who created a secret potion that rendered him invisible and drove him slowly insane.  Since then, there have been many adaptations of the Invisible Man story with the latest coming to theaters this past February.  Starring Elizabeth Moss (The Handmaid's Tale) it offered a modern twist on this old tale.  As the movie makes its way to stores for home entertainment purchase, FlickDirect, in conjunction with Universal Pictures, wants to give one lucky person a chance to win a 4K combo pack of the film.

We will choose one winner at random from all entries received to win this great prize.

What you can't see can hurt you. Emmy winner Elisabeth Moss stars in a terrifying modern tale of obsession inspired by Universal's classic monster character.

Trapped in a violent, controlling relationship with a wealthy and brilliant scientist, Cecilia Kass (Moss) escapes in the dead of night and disappears into hiding, aided by her sister (Harriet Dyer, NBC's The In Between), their childhood friend (Aldis Hodge, Straight Outta Compton) and his teenage daughter (Storm Reid, HBO's Euphoria).
But when Cecilia's abusive ex (Oliver Jackson-Cohen, Netflix's The Haunting of Hill House) commits suicide and leaves her a generous portion of his vast fortune, Cecilia suspects his death was a hoax. As a series of eerie coincidences turns lethal, threatening the lives of those she loves, Cecilia's sanity begins to unravel as she desperately tries to prove that she is being hunted by someone nobody can see.

Rated:  R - for some strong bloody violence, and language.

NO PURCHASE NECESSARY. This film is rated R.  Must be 18 years old to enter the contest.  Employees of all promotional partners and their agencies are not eligible. Void where prohibited. Entries must be received by 11:59 pm on May 25, 2020, to be eligible. The contest is open to all US Residents in the contiguous 48 states. The winner will be asked to provide their full name and a valid email address via Private Message, but their personal information will not be shared or retained in any way.  Sponsors not responsible for incomplete, lost, late or misdirected entries or for failure to receive entries due to transmission or technical failures of any kind.  ONE ENTRY PER PERSON.

Get The App!
Filed Under: contest, giveaway, the invisible man