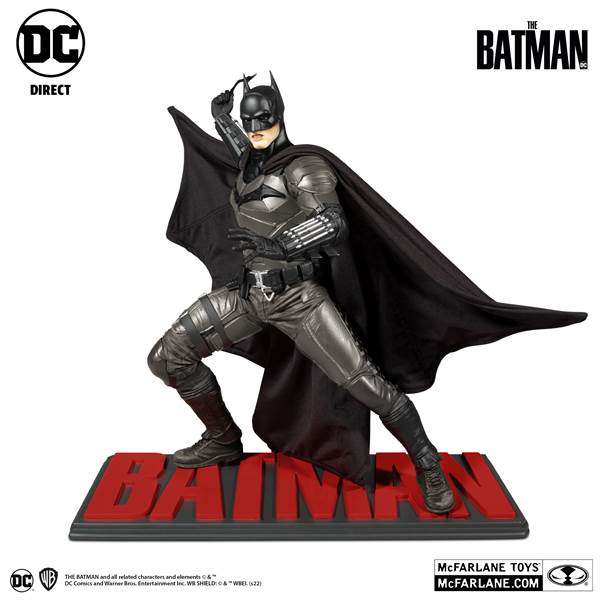 WarnerMedia Global Brands and Experiences has announced that they are launching a new "The Batman" lifestyle merchandise collection, which allows fans to channel Batman/Bruce Wayne and Catwoman/Selina Kyle like never before.

Today, the largest collection of Batman film products in over a decade has been revealed with premier partners worldwide launching "The Batman" fashion, accessories, beauty products, toys, and collectibles inspired by the highly anticipated film. Batman also influenced the latest style statement of the French fashion house Lanvin, who for the first time in the character's more than 80-year history, has dedicated a collection to DC's iconic Super Hero and his on-again/off-again antagonist, Catwoman. First seen on the runway during Paris Fashion Week, the collection will be available online and in select Saks Fifth Avenue stores starting March 2 and on saks.com on March 15, in line with the film's release on March 4 in North America and international release beginning March 2, 2022.

Pam Lifford, President, WarnerMedia Global Brands and Experiences, said, "WarnerMedia Global Brands and Experiences' mission is to engage fans with our iconic characters and stories and excite them for new content releases. 'The Batman' film is hotly anticipated and will be complemented by imaginative, authentically crafted new products and experiences for fans worldwide. This is the first solo Batman theatrical release in more than a decade, and this powerful new story inspired even more ways for fans to engage and celebrate this iconic DC Super Hero."

The products include the following:

Fashion and Footwear: In collaboration with Warner Bros. Consumer Products and DC, Lanvin will bring classic character-inspired visuals to the luxury and sophisticated fashions, infinitely reinvented in the spirit of Jeanne Lanvin's designs. Featuring shades of deep, brilliant blues and purples, Batman and Catwoman's iconic faces, inspired by the timeless images from the comics, appear on the label's signature asymmetric shirt, the metal mesh dresses, and the reversible teddy jacket. Accessories also take on saturated colors and Art Deco lines in a Gotham City style, and the Curbs sneakers are stylish like the Batmobile, which also lends its sleek lines to a minaudiere clutch. The characters also appear on new bags, jazzing up the graceful lines of the label's leather goods.

With something for every fan, other fashion brands capturing "The Batman" vibe include, for the first time in DC history, a Carhartt partnership with coats, t-shirts, hoodies and pants, and TomboyX t-shirts and underwear.

Venus Williams' lifestyle and fashion-forward activewear brand, EleVen by Venus Williams, will debut an all-new collection inspired by "The Batman." Designed to evoke the dark streets of Gotham City, EleVen took inspiration from the neon lights, rain-slicked sidewalks, and midnight moonlight. Authentically Batman, the foundation of the collection is monochrome with a touch of red and "handmade" touches like exposed zipper detailing and lace-up eyelets borrowed from the legend himself, who fashioned his own Batsuit. With a nod to Selina Kyle (Catwoman), sexy, rebellious undertones can be seen in studded styles, mesh shirring, and classic wet-look prints in black and white. The collection will be available on EleVenbyVenusWilliams.com, at Saks Fifth Avenue and Tennis Warehouse, and Internationally at Zalando.com.

Run Gotham City in the new PUMA x BATMAN collection. Created in honor of the release of the new film "The Batman," this training collection makes a statement with moody colors and graphics inspired by the Caped Crusader. With the help of dryCELL technology to wick moisture and ergonomic cutlines for ease of movement, these training pieces will take you through the streets of Gotham City - and beyond.

DC Shop will light up the Bat-Signal with exclusive new merchandise from "The Batman." The new collection, featuring apparel, sporting goods, and more, will be available to order beginning February 1. National retailers and specialty stores including Target, Walmart, and others will also offer additional fashion and footwear styles for adults, juniors, and kids. International fashion partners include Zara, Carrefour, and Tealer to name a few.

Beauty: Renowned leader in luxury haute parfumerie, House of Sillage, has announced a new limited-edition collection in celebration of "The Batman." Featuring a fragrance, lipstick, and candle, The Batman x House of Sillage Collection will be available at Saks Fifth Avenue and online at www.houseofsillage.com. Emilie Heathe x The Batman is a limited-edition collection that introduces three unique nail polish shades in which "The Batman" characters are reimagined, appropriately named "The Dark Night," "Vengeance," and "Madness." The nourishing formula packs a high concentration of color and shine designed to go on smooth and stay on all day. The collection will launch alongside a "Knight Out" nail accessory set, including a nail decal set, Batman-embellished crystal nail file, and beauty clips. The collection will be available for purchase on February 15 through emilieheathe.com. Open Dr. Squatch's limited-edition Soap Bar Bundle and choose your side Batman or Super-Villain. The limited-edition collection features two bar soaps inspired by "The Batman": "The Batman Bricc™" with a leathery, musky scent, and "The Riddler Enigma™" with aromas that are mysterious yet intriguing. The two-bar bundle will be available on March 4 for $20 on Dr. Squatch's website.

Toys & Collectibles: The famous collectible manufacturer McFarlane has a stunning lineup: The Batman, The Riddler and Catwoman figures are all available to pre-order for $19.99. The Batcycle, based on the one seen in the new film, will also be on sale for pre-order for $29.99. The most authentic "The Batman" film statue, created with direct input from the film's producer and director and based on Robert Pattinson's character, is also available for pre-order now. Additional figures and statues inspired by "The Batman" will be announced this year.

The Funko collection celebrating "The Batman" is a must-have for collectors everywhere, with exclusive items available at Target, Walmart, Hot Topic and Pop in a Box. Brought to life in Funko's signature style, the lineup introduces many new Pop! figures based on Batman, Selina Kyle (Catwoman), and the infamous Super-Villains The Riddler and The Penguin ($12.00). Funko is also releasing new collectibles of Batman driving the Batmobile and Selina Kyle riding her motorcycle, as seen in the action-packed film's streets of Gotham City. A standout item in the collection is a Bruce Wayne Pop! figure in his civilian clothes (exclusively available at Target).

Recreate epic crime-fighting scenes from the movie with toys from leading global children's entertainment company Spin Master. Engage your imagination with the new Batman 4-inch and 12-inch ($8.99-$10.49) action figures featuring new characters, Selina Kyle and The Penguin. Fight crime in style with an authentic movie look-a-like Batmobile 4-Inch Scale ($32.99), which comes fully loaded with sounds, LED engine lights, headlights and undercarriage residual glow that makes this toy really come to life. It even includes an exclusive 4-inch Batman figure in an all-black Batsuit. And head into action with theTurbo Boost Batmobile RC ($48.99) that wheelies at high-performance speeds with the push of a button.

"The Batman" takeover began at DC FanDome in fall 2021 when LEGO®, Hot Wheels and McFarlane announced authentic toys and collectibles. The LEGO® brand's collection includes three building sets, featuring mini-figures based on Batman, Selina Kyle, Alfred, and Lieutenant Gordon, along with Super-Villains The Riddler and The Penguin. The collection's new sets are: Batcave: The Riddler Face-off ($79.99 USD), Batmobile: The Penguin Chase ($29.99 USD), and the Batman and Selina Kyle Motorcycle.

"The Batman" Batmobile from Hot Wheels R/C features epic remote-control performance with authentic details and movie-like sculpts for the adult collector and fan of Batman's iconic vehicles. This Batmobile model was designed for collectors who appreciate premium design and precision performance in replica vehicles. This 1:10 scale Ultimate edition features movie accurate graphics, LED lights, smoke and flame FX from both the hood and the rear, detailed exterior and interior, a Batcave-inspired plinth, and a poseable Batman figure behind the wheel. It boasts high-tech features such as light and sound effects and working suspension, as well as a diorama plinth that both Alfred and the Caped Crusader would appreciate for its authenticity. This is a must-have for fans of and distinguished R/C collectors.

Rubies is pleased to debut a selection of new, officially licensed adult and children's costumes in celebration of "The Batman." Outfits inspired by Batman and Selina Kyle (Catwoman) are available for preorder now and will ship by late February. Additional accessories, as well as costumes based on The Riddler and Batman costumes for pets, will launch in time for Halloween.

Food: In select markets around the world (excluding the U.S.), Oreo will replace the classic Oreo cookie embossment with a "The Batman" emblem. These limited-edition Oreos will have custom "The Batman" designed packaging. Fans can also enter a "The Batman" themed sweepstakes in select regions and engage in fun social media campaigns and activities provided by Oreo.

Get The App!
Filed Under: warnermedia, batman, the batman