THE BATMAN Is Coming Out This Week… Win FANDANGO Tickets! 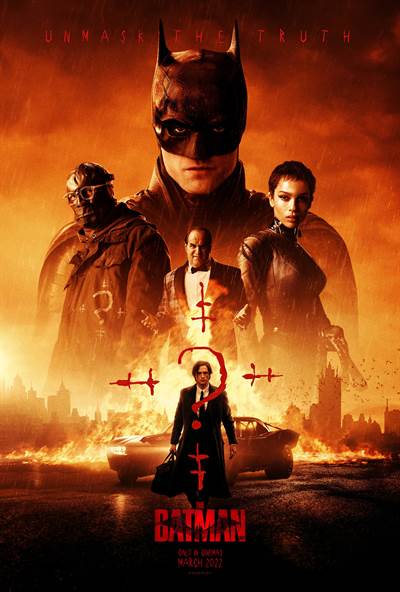 The hugely anticipated THE BATMAN, from Warner Bros. Pictures, stars Robert Pattinson in the dual role of Bruce Wayne and The Batman as the young vigilante is faced with a mystery to solve and faced with such iconic Gotham characters as Selina Kyle, The Riddler, and The Penguin. From filmmaker Matt Reeves. Opening only in theaters on March 4th. Warner Bros. in conjunction with FlickDirect would like to offer some lucky winners one Fandango gift certificate for two tickets to see THE BATMAN at a theater near them during the film's theatrical run.

To enter for a chance to win one Fandango gift certificate for you and a guest to see THE BATMAN follow these easy steps:

From Warner Bros. Pictures comes Matt Reeves' "The Batman," starring Robert Pattinson in the dual role of Gotham City's vigilante detective and his alter ego, reclusive billionaire Bruce Wayne. Starring alongside Pattinson ("Tenet," "The Lighthouse") as Gotham's famous and infamous cast of characters are Zoë Kravitz ("Big Little Lies," "Fantastic Beasts: The Crimes of Grindelwald") as Selina Kyle; Paul Dano ("Love & Mercy," "12 Years a Slave") as Edward Nashton; Jeffrey Wright ("No Time to Die," "Westworld") as the GCPD's James Gordon; John Turturro (the "Transformers" films, "The Plot Against America") as Carmine Falcone; Peter Sarsgaard ("The Magnificent Seven," "Interrogation") as Gotham D.A. Gil Colson; Jayme Lawson ("Farewell Amor") as mayoral candidate Bella Reál; with Andy Serkis (the "Planet of the Apes" films, "Black Panther") as Alfred; and Colin Farrell ("The Gentlemen," "Fantastic Beasts and Where to Find Them") as Oswald Cobblepot. Reeves ("The Planet of the Apes" franchise) directed from a screenplay by Reeves & Peter Craig, based on characters from DC.

NO PURCHASE NECESSARY. Limit one Fandango gift certificate per household.  Must be 13 years of age or older to win. Employees of all promotional partners and their agencies are not eligible. Void where prohibited.  Entries must be received by 11:59 pm on March 4, 2022, to be eligible to enter. Winners will be contacted via e-mail to receive their Fandango code. Sponsors not responsible for incomplete, lost, late, or misdirected entries or for failure to receive entries due to transmission or technical failures of any kind.  ONE ENTRY PER PERSON.