While The Good Lie a very moving story and is definitely an entertaining film with very heart-wrenching real life ties, it’s not one that will be remembered through the ages. Best bet is to rent, unless you are a collector. 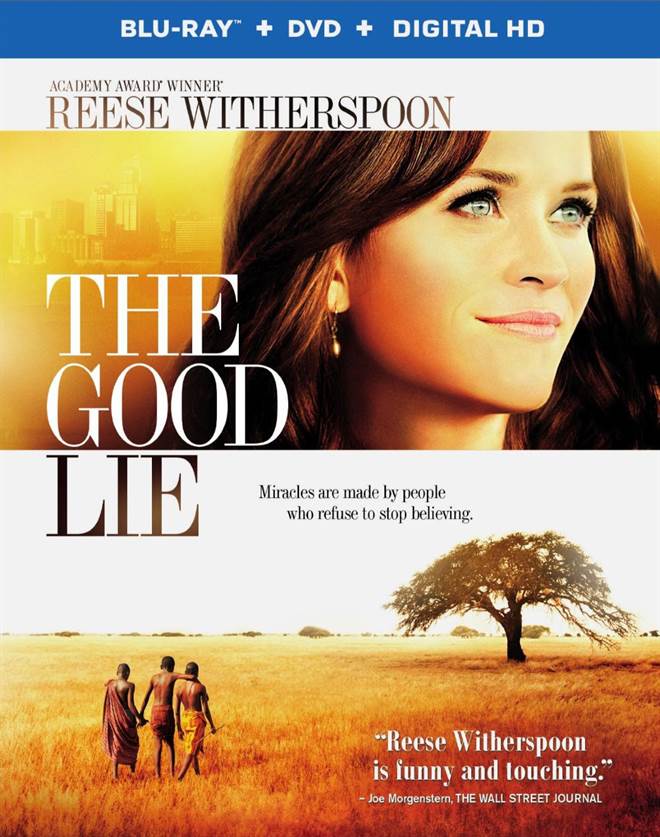 Purchase   DVD/Blu-ray/4K UHD
"The Good Lie", starring Reese Witherspoon (Legally Blonde, Wild), is a story about four Sudanese refugee "siblings".  Based on a true story, the movie depicts the atrocities of the Sudan war.  It tells the story of the numerous people left displaced, along with tens of thousands of children who were orphaned, and living in refugee camps.

The film follows the story of these refugees from childhood, and into adulthood, as they journey to America searching for a better life. What they find is a new world full of technology and ways of life that they struggle to understand, all while trying to keep true to their roots. You watch the film, hoping that this will all work out for the best for all involved, but don't expect a happy ending for all.  Watching this film will certainly put things into perspective.  You will gain an appreciation for the struggle of others as well as realizing how frivolous our materialistic ideals can be.

Director Philippe Falardeau does well with his first major motion picture. While the directing will not win any awards this Hollywood awards season, he kept the pace of the film steady; it didn't feel as dragged out as it could have been.

Presented in 1080p high definition video, the film is crisp and the director's use of natural light comes through as intended on this transfer. However the color's are bit muted and soft at times. The 5.1 DTS-High Definition master audio is has a bit of a narrow field, where the dialog comes in clean and crisp, but some of the background noise is a bit muffled and could have been brought up a bit.

The Good Lie lacks in the way of extras, but includes a featurette discussing the film adapting from the original materials, a few deleted scenes, and the usual Ultraviolet digital copy of the film.

While The Good Lie a very moving story and is definitely an entertaining film with very heart-wrenching real life ties, it's not one that will be remembered through the ages. Best bet is to rent, unless you are a collector.

For more information about The Good Lie visit the FlickDirect Movie Database. This release has been provided to FlickDirect for review purposes. For more reviews by Maureen Buccellato please click here.

Allison Rose
While the movie is well acted and visually pleasing, I don’t expect it to do exceptionally well at the box office because of its limited release.
Full Review | Grade: A