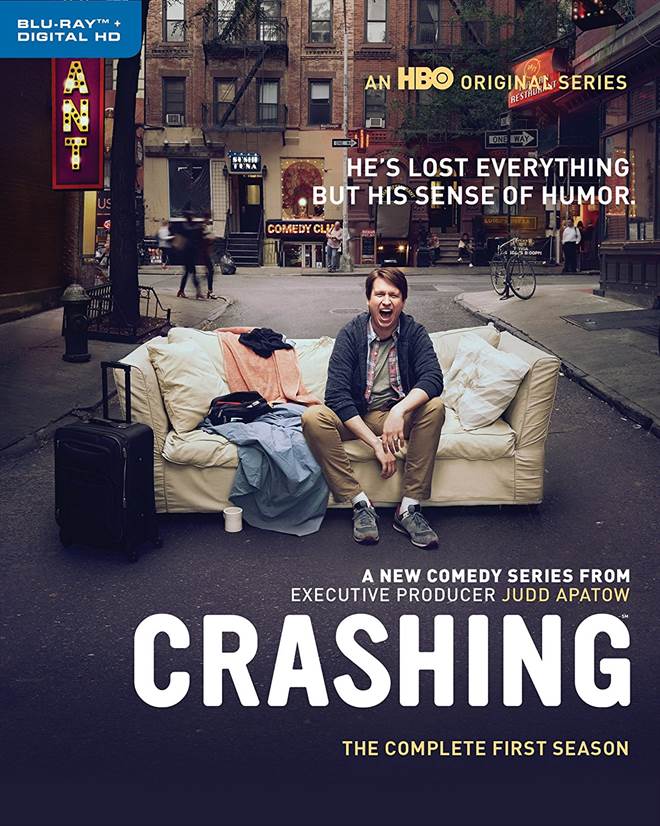 Purchase   DVD/Blu-ray/4K UHD
Look up the definition of the word crashing online and you come up with several options... Merriam-Webster defines it as utter, absolute while The Urban dictionary describes it as either coming down from a drug high or attending an event that is not publicized or that one has not invited to.  It can also mean staying with friends unexpectedly usually sleeping on their couch.  For the HBO show Crashing it can use any or all of these definitions.  Loosely based on show creator and star Pete Holmes' (Fantasy Hospital) life, the show details the bumpy path of the life of a stand-up comic.

Pete lives in the suburbs with his school teacher wife, Jess (Lauren Lapkus; Jurassic World) who supports them while he tried to hone his craft as a comedian.  However, one day he comes home to find her having sex with one of her coworkers.  She tells him she wants a divorce and he suddenly finds himself homeless.  With nowhere to go, he ends up on various individuals couches for a time, including Artie Lange (The Howard Stern Show), TJ Miller (Deadpool), Hannibal Buress (Neighbors), Sarah Silverman (Wreck-It Ralph) and other fellow struggling comedians.

Pete works open mic nights for no money (often having to pay for the opportunity to tell bad jokes to a lackluster and minimal audience).  Meanwhile, his world is falling apart as Jess decides to move to Florida and has a garage sale selling all of Pete's belongings.  Pete also gets his car towed and gets mugged and has his cell phone stolen.  He works on his comedy, getting a little better each time while getting advice from big named comedians (mentioned above) and his own mom.

Holmes plays the loser perfectly but having been raised in the church he is always kind and sweet and annoyingly apologetic (except when he gets angry with Jess's boyfriend who is annoyingly "kumbaya" himself).  Lapkus is very good as the fed up wife who has had enough but, frankly, turns into kind of an unfeeling bitch at times.   The guest appearances are generally fun and enjoyable and its great to watch Pete get advice from former struggling comedians like him.

The Blu-ray is the standard 1080p high definition video quality with a 1.78:1 aspect ratio. While the outdoor scenes are beautifully colorful and bright the interiors, especially in the comedy clubs, are a little grainy and dark.  However, I'm sure that was done on purpose as to make them seem as gritty and dirty as they are in real life.  The DTS-HD master audio 5.1 is well done and clear.  The side and rear channels are used artfully in the comedy clubs to offer the feel of a rich and full experience.

The two-disc set has a number of extras.  Disc one has a "Guest Star Fan Club" that features Artie Lange, T.J. Miller and Hanibal Buress.  There are also snippets of T.J. Miller and Pete and Apurna.  Disc two offers more including "Guest Star Fan Club" with Sarah Silverman, a two-minute synopsis About Crashing, The Art of Crashing summing up the life of a struggling comedian and an hour long live performance Pete Holmes: Faces and Sounds proving he is funnier than his character in the show.

Download Crashing: The Complete First Season in Digital HD/4K from the iTunes store.

For more information about Crashing visit the FlickDirect Movie Database. This release has been provided to FlickDirect for review purposes. For more reviews by Allison Rose please click here.