There is a lot going on in The Blacklist and sometimes I think some of the characters are underutilized, but the consistent story between Keene and Reddington is the underlying theme for this fascinating show. 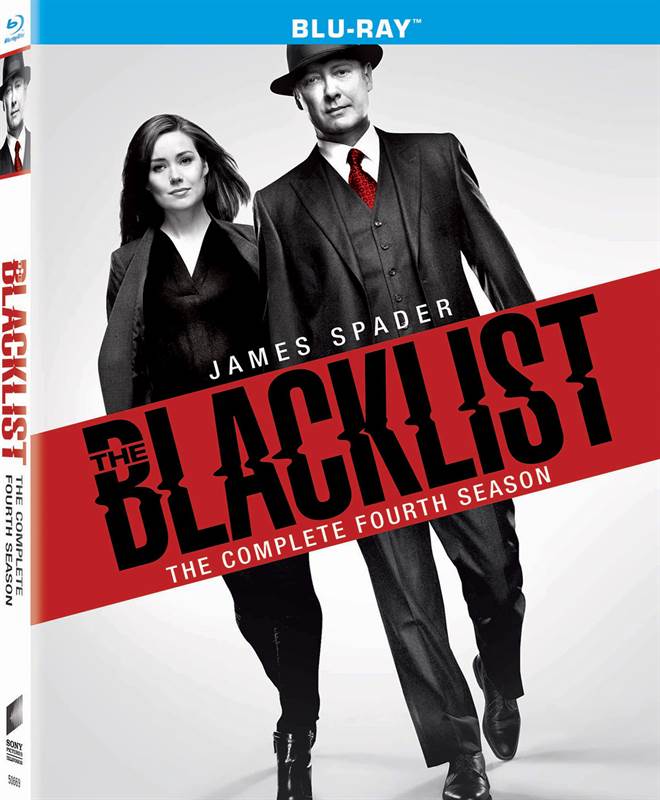 Purchase   DVD/Blu-ray/4K UHD
Some actors have a few hit movies or television shows and fade away as they get older or cannot master different genres.  Luckily, the casting directors of Blacklist chose an actor that can master comedy, sarcasm, drama, and psycho-thriller genres that has propelled their show into a fourth season that will surely see many more.  James Spader (Boston Legal) is The Blacklist and there is no other actor that exists that can master the main character as he does.

The Blacklist is a show about Raymond "Red" Reddington (Spader) who is one the FBI's most wanted list.  He surrenders to the FBI but only to freshman Agent Elizabeth Keene (Megan Boone; Welcome to the Jungle).  Throughout the premiere season and throughout seasons two and three, one of the biggest unanswered questions is – what is the relationship between Red and Keene?   Season Three eliminated one of the biggest possibilities but still leaves the question intact, all while killing off Elizabeth during birth- but in a true soap opera fashion- bringing her back as an end of season shocker and having her and her newborn baby kidnapped as the finale ends.

The Blacklist Season Four really has a distinct split. Season Four begins with Reddington desperate to find Elizabeth, who after faking her death in Season Three, has resurfaced with her newborn child, Agnes.  The issue is that Keen has been kidnapped by who we are lead to believe is her biological father, Alexander Kirk (Ulrich Thomsen; The Notebook).  Reddington is hysterical in his own way about Keene's safety- or is it something deeper that we haven't been told about?  Reddington pulls out all the stops to find Keene- dealing with some of the most horrendous criminals we have seen to date, and he finds he is also being betrayed by those closest to him such as Mr. Kaplan (Susan Blommaert; Law & Order) and even Elizabeth's fiance, former covert operative, Tom Keene (Ryan Eggold; 90210).    Tom is an integral part of the whole Reddington-Elizabeth storyline.   Tom gives Reddington almost an equal-like compadre to keep Elizabeth out of the loop even though it's clear Tom and Reddington's only common interest is keeping Elizabeth alive – and safe (which neither of them ever really do).  Don't think that it is a triangle story between Tom-Elizabeth-Reddington, because there is an FBI agent, always willing to help Reddington for the sake of Elizabeth- Agent Ressler (Diego Klattenhoff, Homeland).

The first half of the season is an exploration of Elizabeth's identity and relationship with Kirk.  While the first few episodes of the season seemed to be a little repetitive with the "who has Elizabeth now" theme, the action keeps the episodes propelling forward.  Constant unanswered questions keep the storyline moving and just when one mystery seems to be solved, you realize that it was only the tip of the iceberg and that no matter how involved in the mystery you become, there is still so much more you don't know, like the answer to the question Kirk kept asking Reddington – "Are you her father?"  The final answer- is it true or not?

For the second half of the season, the writers bring us back into what The Blacklist is all about- chasing the bad guys and trying to find out of what Reddingon's business really consists, as well the mystery from the very first episode of Season One- why did Reddington surrender to the FBI and Keene?    Of course, Reddington gets ratted out and bloodshed ensues when he's found out to be working with the Feds.  Mr. Kaplan faces off with Reddington and after he failed to kill her earlier in the Season, it's no wonder she's out to get him with a vengeance, but it's the truth she seeks to use instead of anything else.  Apparently, it is the truth that can bring down Reddington faster than anything else we've been lead to believe.   While the second half of The Blacklist is minus Ryan Eggold's character, Tom, the finale has our favorite bad guy/good guy with a prop that could bring the whole Keene-Reddington relationship to an explosive end.  I guess we will have to wait until Season 5 to see what it is!

The video is presented in 1080p High Definition with an aspect ratio of 1.78:1.  I love all of the colors and vibrancy in outside scenes and the blacks and grays for the interrogation scenes.  Seeing that a lot of people seem to get shot in The Blacklist, I do appreciate that many different shades of red are used for those particular scenes.  Sony uses 5.1 DTS_HD for its audio presentation, which is consistent to hear the dialogue, especially with Spader's unique quietness while delivering his lines.  Background music is never overpowering and sound effects are clear without being too shocking.

Bonus features on this Blu-ray Digital Combo include an exclusive A Darker Shade of Red (found only on the Blu-ray) as well as Deleted Scenes, Gag Reels, Mr. Kaplan:  End of an Era, A Lighter Shade of Red, and 3 Episode Commentaries.  All the bonus features are fantastic but with the Mr. Kaplan feature, there will be at least one character that will not be coming back from the dead for Season 5.

There is a lot going on in The Blacklist and sometimes I think some of the characters are underutilized, but the consistent story between Keene and Reddington is the underlying theme for this fascinating show.  Even when the mystery may be solved, you know there is something else lurking just around the corner and you want to know what it is.  As for this Blu-ray, everyone needs Raymond Reddington in their house.  Thank goodness for James Spader because he just keeps getting better with time.

For more information about The Blacklist visit the FlickDirect Movie Database. This release has been provided to FlickDirect for review purposes. For more reviews by Jennifer Broderick please click here.

The Blacklist images are © Sony Pictures. All Rights Reserved.