Shameless is one of the funniest shows on television, and while a lot of what happens on the show is quite terribly wrong, at the heart of the show is a family that loves and cares for each other and is just trying to get by in this crazy world. 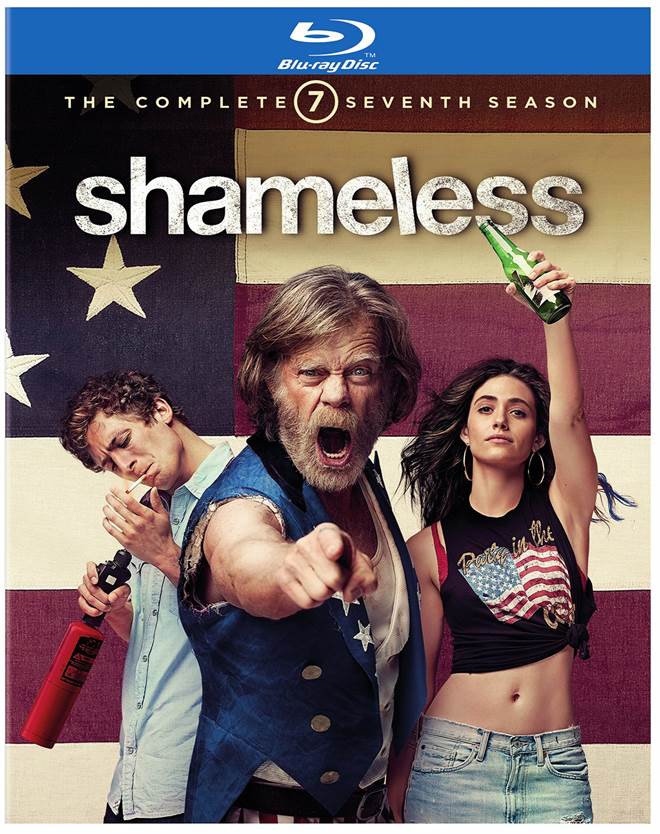 Purchase   DVD/Blu-ray/4K UHD
ARE YOU KIDDING ME? Did you miss a season? Where were you? Even a Gallagher knows not to miss an episode! Get it together!

Lip, after flying off the wagon, lost his college ride and went into rehab. Carl lost his Thug persona and is now has a girlfriend? V married Svetlana to keep her in the country and Kev is living the dream with 2 wives.

Debs gave birth to Franny and is dealing with raising a kid as a teenager. Frank revealed to Fiona that Sean is still a junky and ruined her wedding day, and in turn, the gang threw Frank off the bridge into the river!

Welcome to Season 7 of Shameless…Showtime's first family of dysfunctionality! If you're a season behind, Shameless: The Complete Seventh Season is out this week on Blu-ray and DVD, and if you don't know what Shameless is…. we have a BIGGER problem!

Ok, so I will go out of my way just in case you know nothing about the series. Shameless is actually a remake of a British series of the same name. The American version is set in Chicago and follows Frank Gallagher (William H. Macy) who consistently wins the award for worst father of the year, year after year. Frank has six kids. Fiona, the eldest daughter, while having major issues of her own, is the mother or parental figure of the bunch. Lip, the oldest son, is the smartest of the family. Lip has the best chance of getting out of the projects but he's too self-destructive. Next up is Ian. Ian is actually Monica's son. Monica is Franks ex and greatest weakness. But things always blow up between Monica and Frank…its either the booze, drugs or Monica's bi-polar issues. Ian also was diagnosed with bipolar disorder too and deals with bigger issues as the only gay child of the Gallagher's. Debs, the youngest daughter is the self-conscious one and while way more mature for her age, Debs tends to be Fiona's backup…well until she decided to give birth to a daughter of her own while in high school. Then there's Carl! Carl, while being one of the youngest, is becoming the most resourceful. Lastly, there's Liam, the only black child from two white parents, which supposedly is due to a dominant black gene from Frank's grandmother. Yes, really. Add to the Gallagher family their neighbors and best friend Kev & Veronica, who own and run the Alibi bar with Svetlana, and you have the most dysfunctional cast put on television since the Bundy's!

Season 7 kicks off with Frank in the hospital. Waking up from a coma after 29 days, he learns that not only did no one come to find him, his family actually tried to kill him. But alas as Frank puts it, you can't kill a cockroach! Kevin is still in bliss with 2 wives taking turns scratching his… itch while raising 3 kids. But the three are having financial issues and, well, many schemes are in the mist. Does anyone need a job as a topless maid? But on a bigger scale, Fiona tends to take over season 7. Fiona takes over as manager of Patsy's Pies and while doing so meets the owner and finds herself on a quest to be more than just the mother figure of the family. Fiona wants more… like her own business. Frank finds himself creating his own homeless shelter (of course he has his own agenda). I won't go into much about the details of season 7 so I don't spoil just how good this season is but I will say this… Monica comes back in a big fashion. In fact, there were all kinds of rumors that season 7 would be the last season of Shameless, and as the season came to a close it started to feel like that's where they were heading, but the smart people at Showtime decided to renew the show.

Shameless is one of the funniest shows on television, and while a lot of what happens on the show is quite terribly wrong, at the heart of the show is a family that loves and cares for each other and is just trying to get by in this crazy world. If at any time you think your life might be crazy or you're stressed, watch Shameless and you will feel so much better about your position in life! Shameless: The Complete Seventh Season also includes 2 new featurettes: Growing up Shameless and The Shameless Politics of Frank, along with unaired scenes. The Blu-ray is the standard 1080p high definition video quality with a 1.78:1 aspect ratio and DTS-DHD Master Audio 5.1  Both are terrific and enhance the  viewers pleasure of this fun show.  If you haven't seen season 7, go out and get this set and binge it! You have just over a month before the Season 8 Premiere of Shameless on Showtime on November 8th.

And, if you haven't started watching Shameless… you have 84 episodes to catch up on, so why the hell are you still reading this garbage! Get to it already!!

I give Shameless: The Complete Seventh Season five out of five middle fingers; it's one of my favorite shows currently on TV, and the middle fingers are the perfect expression if you don't agree!

For more information about Shameless visit the FlickDirect Movie Database. This release has been provided to FlickDirect for review purposes. For more reviews by Sean Ferguson please click here.