There are few people out there who don’t know the famous line from the 2008 film, Taken. It has become iconic along with the character and helped to launch two sequels as well as a television show - as of this past year. 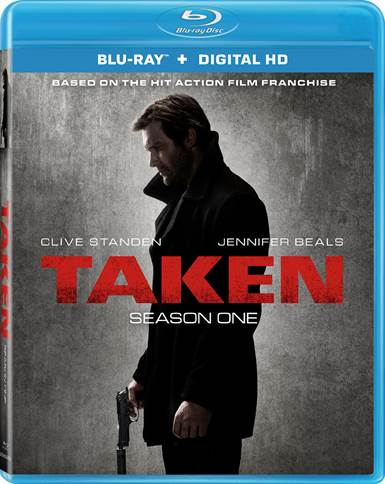 Purchase   DVD/Blu-ray/4K UHD
"I don't know who you are. I don't know what you want. If you are looking for ransom I can tell you I don't have money, but what I do have are a very particular set of skills. Skills I have acquired over a very long career. Skills that make me a nightmare for people like you. If you let my daughter go now that'll be the end of it. I will not look for you, I will not pursue you, but if you don't, I will look for you, I will find you and I will kill you." -- Liam Neeson, Taken

There are few people out there who don't know this famous line from the 2008 film that introduced us to the elusive Bryan Mills (Neeson, Schindler's List).  It has become iconic along with the character and helped to launch two sequels as well as a television show - as of this past year.  Premiering as a mid-season, 10 episode series, Taken garnered mixed reviews but was received well enough to warrant a second, expanded season, which is set to premiere on February 15, 2018.

The premise of the show takes us into Mills' (Clive Standen; Vikings) life long before the first movie takes place.  He is young, single and a former Green Beret who gets mixed up with a drug lord named Mejia (Romano Orzari; White House Down).  Mejia's ultimate death becomes his obsession after Mills' sister is murdered by the Cartel.  Mills, in turn, attracts the attention of a government agent, Cristina Hart (Jennifer Beals; Flashdance) who recruits him to become part of an elite secret CIA team.

Throughout the season, this team takes on special assignments (hence the secrecy) that see them all over the world.  Mills barely assimilates into this group but manages to hold his own.  The intricacies of their missions don't always work out as planned and at one point the bane of Mills' existence, Mejia, temporarily slips through his grasp only to be once again captured and then killed by Mills.  Apparently, this lands Mills in hot water as the season ends.

For some reason the "powers that be" think it is a good idea to take successful movies and make them into television series and occasionally it works but in this case, not so much.  To be honest, besides the name and other minor details the show has absolutely nothing to do with the movie.  It could be any other "spy" related drama but the higher-ups thought they would just bank on the popularity of the films to garner an audience and while the gamble paid off at first the show doesn't offer enough to sustain it.

The cast was well chosen but without the right material, they just don't get to show off their best.  Standen exudes power and charisma on Vikings but there isn't the same level here; though, I don't think that is his fault.  Beals is excellent as the woman in control and for me, she is one of the highlights of the show.  The rest of the cast is fairly insignificant as many of them won't be returning for Season two (which frankly isn't a good sign).  The episodes are simply bland and don't make me want to "tune in next week".

The Blu-ray is high definition video 1080p quality so the scenes have some nice detail to them.  However, with the color palette is mainly muted with bluish tones that tend to blur the edges a little more than a brighter color scheme might.  The DTS-HD Master audio 5.1 is clean and clear with generally good quality in the surround sound aspect.  The disc set offers little in the way of extras other than some bookmarks, a trailer and one four-minute-long behind the scenes feature called Taken: On Set.

If you are hoping for the same fare as you are accustomed to from the movies, then Taken: The Complete First Season One is going to disappoint a little bit.  However, if you want something to binge watch with some drama and action then you can pick up this Blu-ray set. Season two will have a mostly new cast and 6 more episodes so we will see how things change down the road.

Purchase a DVD/Blu-ray/4K UHD physical copy of Taken: The Complete First Season One today at Amazon.com

Download Taken: The Complete First Season One in Digital HD/4K from the iTunes store.

For more information about Taken visit the FlickDirect Movie Database. This release has been provided to FlickDirect for review purposes. For more reviews by Allison Rose please click here.