Considering Shakur’s untimely death, this Blu-ray is certainly a collector’s item for his loyal fans. 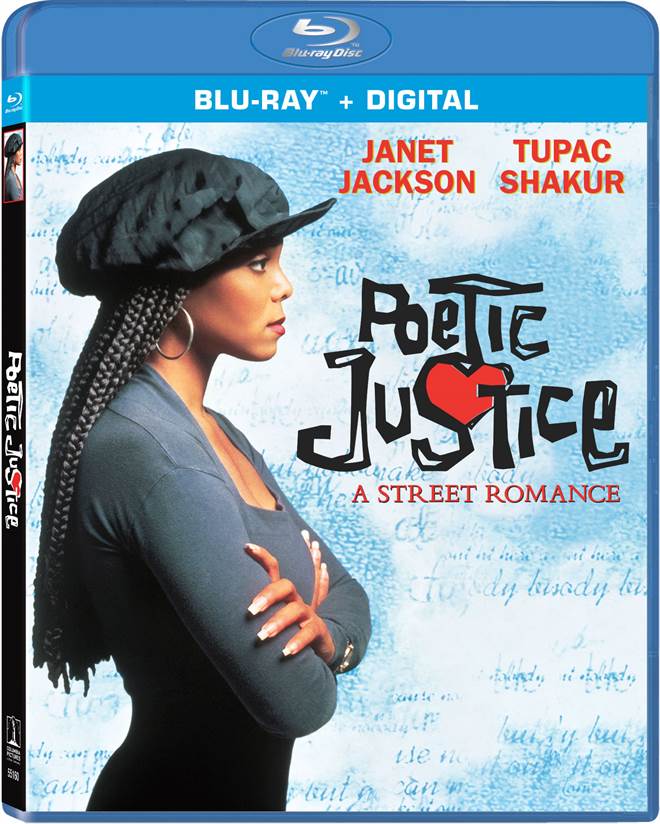 Purchase   DVD/Blu-ray/4K UHD
At the ripe old age of twenty-three, John Singleton wrote and directed his first feature film – Boyz n the Hood.  The movie offered an honest look at the lives of young black men living in an impoverished neighborhood in California and garnered Singleton two Oscar nominations.  Two years later his second film, Poetic Justice, was released and starred Janet Jackson (Good Times) in her first major film role.  Opening at the number one spot at the box office in July of 1993, the film has become a cult classic.  As it celebrates its twenty-fifth-anniversary Poetic Justice, along with another Singleton hit, Higher Learning, are being released on Blu-ray this month.

Justice (Jackson) lost her alcoholic mother at an early age to suicide and then watched as her boyfriend and first love was murdered right in front of her.  Afterward, she retreated into herself as a loner and did not attend college.  Instead, she completed cosmetology school and worked in a local salon where she kept to herself.  Justice rejected many advances including that from postal worker Lucky (Tupac Shakur; Above the Rim) who deemed her to be a cold bitch. Meanwhile, Justice's best friend, Iesha (Regina King; If Beale Street Could Talk) did her best to convince Justice to live a little.

When a trip to Oakland with Iesha and her boyfriend arose Justice reluctantly agreed to go only to find out that Lucky will also be going.  Angered, she tried to back out but ended up going anyway and over the course of a long trip and much drama between Iesha and her boyfriend, Lucky and Justice ended up confiding in each other, shared a kiss and got along – that is until they arrived at their destination and Lucky finds out his cousin has been killed.  He blamed himself and Justice for not getting there sooner believing he could have prevented the death had he been there.  A few months later Lucky shows up at the salon with his young daughter and apologized to Justice rekindling their budding relationship.

Jackson is the shining star in this groundbreaking (at the time) film.  She infuses Justice with depth and layers and a general sadness that grips at the viewer's heart.  She and Shakur have palpable chemistry which makes their love/hate relationship believable if a little rushed.  King has a solid showing in one of her earliest roles and it is obvious she will go onto have a long career which we are now seeing.  The rest of the cast though is fairly cringe-worthy as they recite Singleton's curse-laden script.

The Blu-ray presentation is 1080p high definition video quality and the transfer is decent here.  The colors are well represented and the picture is sharp and clean.  The DTS-HD Master Audio 2.0 is decent for showcasing this terrific soundtrack. The mix is well done and the music makes nice use of the surround speakers. The combo pack offers a digital download and the Blu-ray disc which houses the feature and the following extras: Commentary with Singleton, Theatrical trailer, never before seen deleted scenes, Janet Jackson's and Tupak Shakur's screen test, and revisiting Poetic Justice with John Singleton.

While not Singleton's strongest feature, Poetic Justice has some good points.  Jackson's performance solidified her not only as a musical powerhouse but as a bonafide actress as well and the chemistry between her and Shakur is undeniable.  There is a great soundtrack to enjoy and the poetry of Maya Angelou is a treat for any viewer to enjoy.  It also speaks to a segment of the population who can identify with these characters and their lives.

Considering Shakur's untimely death, this Blu-ray is certainly a collector's item for his loyal fans.