Home / Reviews / The House By The Cemetery

The House By The Cemetery (1984) Blu-ray Review

Horror fans will relish the influences present here, from Lovecraft to modern slasher... House By The Cemetery has something for everyone. 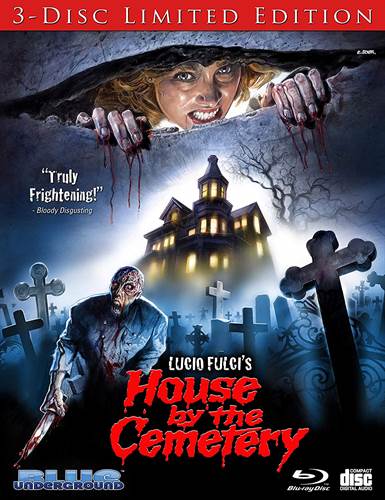 Lucio Fulci is a legend of Horror Cinema. It remains his defining work in a career spanning decades as well as vastly different genres, from comedies and westerns to sci-fi and fantasy. However, Fulci will forever remain the master of terror.

The Maestro himself was often characterized as mercurial, capricious, even, it is said, prone to moments of gleeful sadism, whilst filming his actors during scenes of murder or gore. He had a dark side, there can be no doubt and he obviously channeled these dark emotions and infused them into every scene in his films. Giving them an oftentimes abstract, nightmarish quality. It is that dreamlike sensibility which makes him inaccessible to mainstream viewers, and so beloved by the hardcore horror community.

House by the Cemetery is no exception to this, although it is more plot-heavy and linear than his other works, such as the epic, The Beyond.  House by the Cemetery resides outside his "Gates of Hell" cycle of films but is one of his most accessible and traditionally creepy films.

A young family moves from their cramped New York City apartment to a spacious new home in New England. But this is no ordinary house in the country: the previous owner was the deranged Dr. Freudstein, whose monstrous human experiments have left a legacy of bloody mayhem. Now, someone – or something – is alive in the basement, and home sweet home is about to become a horrific hell on earth.

The ‘Monster in the house' film isn't a new concept, however with Fulci at the helm, you can be certain to expect the unexpected. The set pieces here are thoughtfully crafted and that damn cellar, with its impossibly rusted lock, is the bane of the Boyle family's existence. You will want to avoid going into the cellar at all costs.  Alas, it would not be a horror movie without unsuspecting victims and there's enough innocent bloodshed here and scenes of gore to satisfy your rabid thirsts. There's even a bat-attack scene, which seems to be so torturous in length, you will wonder if the bats are perhaps, things of evil, as well, since they never seems to die. Similar in setup and tone as the spider scene in The Beyond, I simply love the nightmare logic in all of his movies.

For modern viewers watching Fulci movies for the first time, you will not see any CGI here, nothing polished, no edges smoothed out. You must prepare for a tangible, and physically weighty experience, which Blue Underground provides us with in this excellent update. But as horror fans you will relish the influences present here, from Lovecraft to modern slasher to the Monster, ‘House' has something for everyone.

The lavish 4k transfer, in 1080p, 2.40:1 widescreen has never looked better. I didn't remember the beautiful use of color in this film, but the restoration really allows such clarity, from the red wallpaper in the Boyle's bedroom to the stained glass window in the parlor.  Of course,  the bloody scenes, usually muddied in darkness are so clear and lurid, here. I was lucky enough to have seen "House" in a theater, and though the 35mm print was in excellent shape, I feel like I am watching the film for the first time. Even though there is a bit of graininess, it remains a beautifully tactile and clean, transfer.

The audio is also updated, providing both an English and Italian audio selection in 5.1 DTS-HD as well as a cleaned-up 1.0 DTS HD mix. I have the previous Blue Underground Blu-ray of this film and I can honestly say that this is a much needed, as well as noticeable, upgrade. The dialog is always clear and upfront, the under-played monster growls are (maybe it's just me) more pronounced and imminent.

This release is also jam-packed with Special Features. There's the Audio commentary with author/critic, the knowledgeable and engaging Troy Howarth.

One of my personal favorites is ‘Meet the Boyles' Interviews with the stars Catriona MacColl and Paolo Malco, which kicks off like an 80's sitcom teaser, with whimsical music over scenes of shock and violence. It's hands down the funniest intro I have ever seen, and the insight they bring regarding their time on the film, especially about Fulci, is invaluable.

Also included are:  Haunted House Story, Interviews with the co-writers Sachetti and Briganti, To Build a Better Death Trap, Interviews with the Cinematographer Sergio Salvati and Make-up and effects artist Maurizio Trani. Plus new, and exclusive interviews for this release, House Quake, Calling Dr. Fraudstein, and a Q&A with Catriona MacColl.

And last but not least is a 20 page, full-color booklet, with an essay by the ubiquitous, Michael Gingold, who provides an erudite and interesting review of the film, you won't want to miss.
Rounding out the set is Disc Three, the Walter Rizzati Original Motion Picture Soundtrack, which is a synth-heavy score of ethereal, haunted house goodness. I'm listening to it as I write this review and it's the perfect, creepy background music, to put you in the mood.

Considering his last film was in 1991, and he has been gone since 1996, his interest has not waned, over time. Rabid fans crowd The Alamo Drafthouse, as well as other curated venues, providing new generations, unwavering support for his lurid and unflinching tales of terror…creaky staircases, flooded basements, Warlocks, hell-bent on summoning the apocalypse, Zombies, crawling from their graves to thrust jagged splinters into screaming damsel's eye-sockets, and so much more.

Nightmare cinema has many names. One spoken softly, but with great force is that of the Maestro, Lucio Fulci. The importance of his Oeuvre on modern horror movies deserves a place with the likes of Carpenter, Romero, Argento, and Craven. Blue Underground has done a fantastic job of ensuring his name will not be forgotten.

Pick up House by the Cemetery, but beware of the Cellar… you may never escape.

Purchase a DVD/Blu-ray/4K UHD physical copy of The House By The Cemetery today at Amazon.com

Download The House By The Cemetery in Digital HD/4K from the iTunes store.

For more information about The House By The Cemetery visit the FlickDirect Movie Database. This release has been provided to FlickDirect for review purposes. For more reviews by Leonard Buccellato please click here.

The House By The Cemetery images are © Almi Pictures. All Rights Reserved.