The voice talent is made up of consummate professionals who create numerous voices while improvising some of their lines, often to hilarious results. 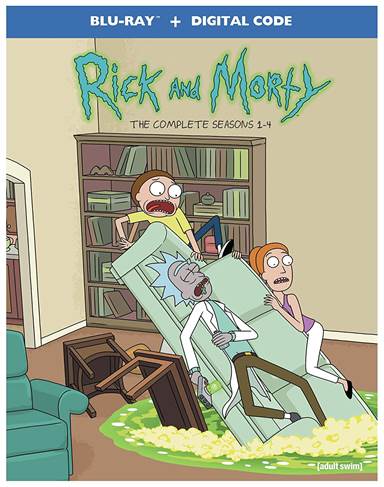 Animation's history can be traced back to the old stone age 3.3 million years ago when cave dwellers would depict people and animals in motion in drawings on cave walls.  In the 1600s, shadow play and the magic lantern would spark the imaginations of young and old alike, but it would be another 200 years before the invention of the stroboscopic disc truly developed drawings into motion.  By the beginning of the twentieth century, animation had come along way and in the past 100 years, there have been incredible advances in technology.  Animation now comes in various forms and is created for a wide array of audiences.  Case in point, the Cartoon Network's hit show, Rick and Morty.

After 20 years Rick Sanchez (Jason Roiland; Solar Opposites) shows up at his daughter, Beth's (Sarah Chalke; Scrubs), house much to her husband, Jerry's (Chris Parnell; Walk Hard; The Dewey Cox Story) dismay.  He moves in as a guest where he is constantly taking his grandson, Morty (Roiland), on adventures in outer space and other dimensions.  Morty is Rick's moral compass as Rick is an alcoholic mad scientist who tends to shun conventional norms such as school, marriage, family, and love. Morty's older sister, Summer (Spencer Grammer; As the World Turns), occasionally joins them on their journeys while attempting to navigate the normal anxieties of high school.

Debuting in December of 2013 as part of the network's edgier nighttime programming dubbed Adult Swim, Rick and Morty was renewed for a second season a mere two months later.  Critics and fans alike thought the premise was interesting, the writing was engaging, and the stories were hilarious. The show quickly garnered a cult-like following fueling the network to ink a multi-season deal.  Season One established the characters and dynamics of the series while each subsequent season became a bit more outrageous and brash.

The voice talent is made up of consummate professionals who create numerous voices while improvising some of their lines, often to hilarious results.   Roiland voices the two lead characters and distinguishes between them by their speech and actions.  Chalke, as Beth the horse heart surgeon has a terrific sense of timing (just saying horse heart surgeon is a ridiculous concept in and of itself).  Grammer perfectly embraces the teenage angst one would expect from her character.  Numerous guest stars throughout the four seasons and fresh elements to a shocking, disturbing, and comical show.

While the seasons have been previously released on Blu-ray, they have never been put together in one set, until now.  The 1080p visuals enhance the animation beautifully as every scene is detailed down to the last monster and alien.  The Dolby TrueHD 5.1 audio rivals that of big-budget, blockbuster movies with a wonderful mix of dialogue and surround sound effects.  Each season has its own set of previously released extras, but the set includes a digital HD code and an exclusive poster.   The extras are made up of audio commentary, deleted scenes, animatics, behind-the-scenes features, etc.

Make no mistake, Rick and Morty is anything but a fun Saturday morning cartoon made up of loveable characters and mildly violent antidotes.  It is crass, repulsive, politically incorrect, and at times makes you want to punch Rick in the face (if he was real).  However, the shocking storylines enhance the humor that much more and it is inevitable that the viewer will find themselves in a fit of side-splitting laughter.

One may ask why anyone would need Rick and Morty: The Complete Seasons 1-4 Blu-ray if they already own each season individually.  The answer is to reduce shelf space on the bookcase and to get the special poster.  However, if one doesn't own the individual Blu-ray releases, they will want to buy this set and watch all four seasons several times.

Download Rick and Morty: Seasons 1-4 in Digital HD/4K from the iTunes store.

Listen to the Rick and Morty: Seasons 1-4 soundtrack on Apple Music.

For more information about Rick and Morty visit the FlickDirect Movie Database.