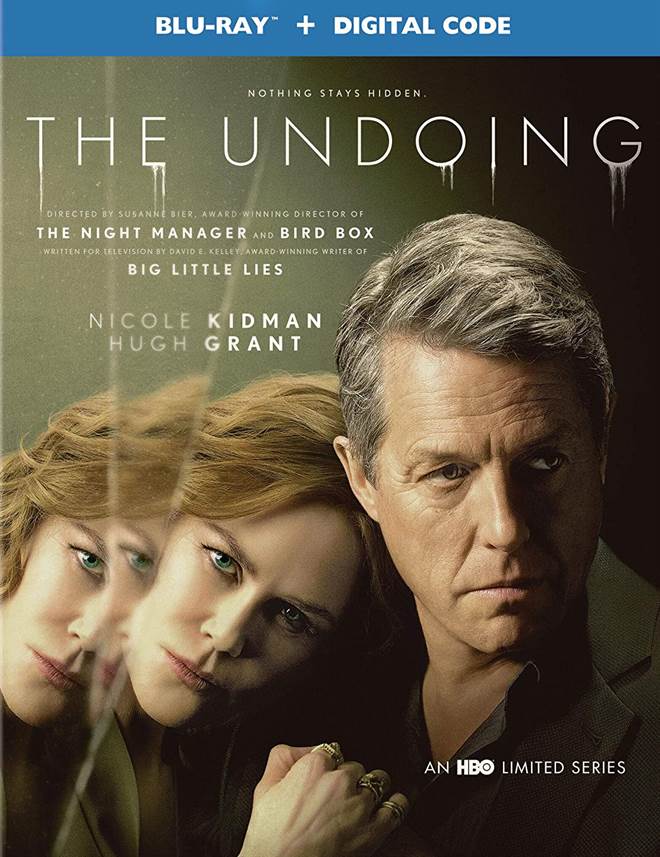 How well do we really know the people who are closest to us?  What deep, dark secrets dwell inside locked doors somewhere in the back recesses of a person's mind?  What if you discovered one of your parents was gay? Or if one of your siblings had a drinking problem? Or what if your husband, that you had known for seventeen years was really an adulterer and murderer?  Would you believe it?  Would you defend him to others?  Would you be able to live through the nightmare of your whole world seemingly turned upside down in an instance and survive while trying to proclaim his innocence?  This is the world Grace Fraser (Nicole Kidman; Moulin Rouge!) finds herself in in HBO's The Undoing.

Grace has an idyllic life.  She came from a wealthy family and became a psychologist in Manhattan.  Her husband, Jonathan (Hugh Grant; Love Actually) is a pediatric oncologist saving hundreds of children's lives and their son, Henry (Noah Jupe; A Quiet Place) attends Reardon, one of the most prestigious private schools in The City.  She has lots of friends whose children also attend Reardon, and they sit on fundraising committees together so they can all get together despite their hectic lives.  However, when a new, young mother, Elena (Matilda De Angelis; Rose Island) of a Reardon scholarship student, Miguel (Edan Alexander; Two and a Half Men), shows up to the fundraising committee meeting, things quickly unravel.

On the morning after the fundraiser event, Miguel goes to Elena's art studio and finds her murdered.  Police start asking questions to everyone at Reardon and begin to focus on Grace and Jonathan.  The latter told Grace he was going to a medical conference in Cleveland but when she is unable to reach him, she finds his cell phone in the nightstand drawer.  Over time, Grace discovers Jonathan was having an affair, that he was let go from the hospital three months earlier after a disciplinary hearing, and that he had a younger sister who died when he was fourteen.  Grace didn't know any of this and is blindsided each time new and disturbing facts about her husband come to light.

Kidman is, as per usual, outstanding.  Grace's calm outer veneer belies the chaos bubbling inside her as her world is crashing down around her.  Grant is often overshadowed by Kidman but still manages to pull off a range of emotions that can change at the drop of a hat.  Though young, Jupe has some impressive roles on his resume and is certainly one to watch.  Playing Grace's father is exceptional Donald Sutherland (The Hunger Games series) who once again reminds us why his career has spanned over five decades.

Primetime Emmy Award winner David E. Kelley (Big Little Lies) penned this six-part miniseries and did a fantastic job with making Kidman shine as a psychologist, as well as keeping the story murky enough to maintain the aura of "who done it?" throughout the six hours. Lending her talents and keen eye is director Susanne Bier (Bird Box) who offers varying visual perspectives and camera angles throughout the series.

The Undoing grabs hold of the viewer from the very beginning and leaves enough "clues" and drama to keep us coming back until the very end.  Outstanding casting, sharp writing, and excellent directing make this mini-series engaging.  It's the trifecta of good storytelling and is so much more than merely a nighttime soap opera intended only for "holly homemaker" or all the "soccer moms in the world".

HBO has been synonymous with quality television for over thirty years so there is no reason to expect anything less and once again, they don't disappoint.

For more information about The Undoing visit the FlickDirect Movie Database. This release has been provided to FlickDirect for review purposes. For more reviews by Allison Rose please click here.

The Undoing images are © HBO Max. All Rights Reserved.