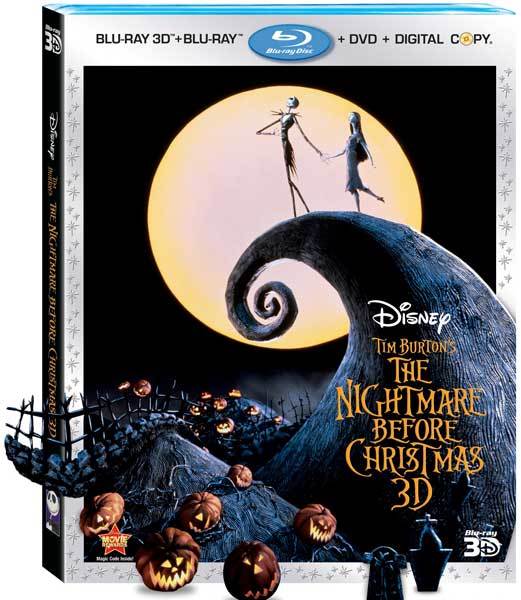 Purchase   DVD/Blu-ray/4K UHD
Coming out on Blu-ray 3D combo pack is a rerelease of the 2008 Blu-ray edition of The Nightmare Before Christmas, with the addition of the 3D version that was created in 2006 for theatrical release.  The Nightmare Before Christmas is Tim Burton's iconic stop-motion animated feature, with an original story and his unique artistic vision. Jack Skellington, the Pumpkin King, is depressed after the Halloween celebration, hoping for something other than that holiday, when one day he comes across a unique grove of trees.  The grove of trees each have a different design on them, such as a bunny, shamrock and a Christmas tree.  At that exact moment, unbewonst to Jack, those trees are portals between the various holiday-towns.  Jack lives in Halloweentown, and he ventures into the Christmas tree and is sent to Christmastown, which is the true start of his adventure.  Along the way, Jack learns the true meaning of friendship and the holidays all while trying to set things right.

Unlike 3D films that were made specifically in 3D, such as Avatar or Mars Needs Moms, this movie was created into 3D via post-production.  On the whole the conversion was well done for adding depth of field to the various shots, which seems to have been aided by the fact that the stop-motion scenes were actually 3D to begin with, rather than a 2D animated feature which will also be Disney's next post-production conversion being released.  However, the depth of field in the various shots was not always the same, and in some cases it caused some of the fine details of the movie to be washed out.

Tim Burton opens the 2D Blu-ray by saying that it allows so much of the detail to come out, and he is right.  This movie deserves to be seen at least once by everyone on 2D Blu-ray.  Not only is every single scene sharp and crisp, the audio becomes virtually 3D with an excellent mixing of the rear surround channels in more than one scene to literally bring the viewer into the middle of the movie.  It has been a long time since I've seen a movie do that, and this one hit a home run with it.  Additionally on the 2D disc you have a complete ride through and a making of the Haunted Mansion Holiday makeover at Disneyland in Anaheim, where the original Haunted Mansion is converted into a Nightmare before Christmas mansion for the Halloween and Christmas seasons.  This special feature alone is worth the price of the disc.

But like I noted above, the 2D Blu-ray was already released three years ago and this release does not include any new special features, so unless you have a 3D TV and want the 3D copy of the movie, there is no reason to get this movie.  But if you don't have a copy of it yet, this is a wonderful value to get four different copies of the movie at the same time.
Cast:
Directed By:
MPAA Rating: PG

For more information about Tim Burton's The Nightmare Before Christmas visit the FlickDirect Movie Database. This release has been provided to FlickDirect for review purposes. For more reviews by Roger Longenbach please click here.

Tim Burton's The Nightmare Before Christmas images are © Touchstone Pictures. All Rights Reserved.