What starts out as a mocumentary morphs into an honest and true documentary investigating a cold case file from Haliburton, Ontario. 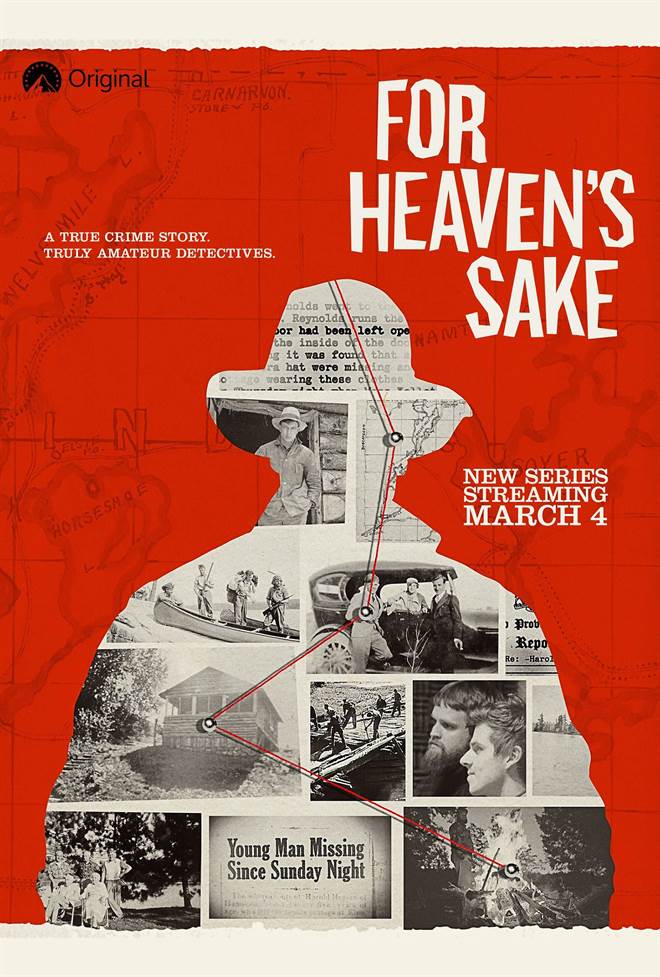 It seems every media company is getting into the "streaming" business and this week Paramount joins that ever-growing list with their new channel, Paramount+.  The content will include a library of 2,500 movies and 30,000 television episodes, as well as new content.  One of those new endeavors is For Heaven's Sake, a multi-part documentary about the mysterious disappearance of Harold Heaven back in 1934.  Harold, the oldest of four brothers, stayed at the family's summer cottage after the season was over and went missing north of Ontario at the end of October.  Now his great-great grand-nephew, Mike Mildon, and Mike's best friend, Jackson Rowe, record their investigation over the course of a year (COVID halted their search for several months).

The eight-episode series includes interviews with most of Mike's family members, some of the townsfolk, relatives of Harold McKracken (who was a suspect when Harold Heaven originally disappeared), and a retired police officer who assists Mike and Jackson with their investigating skills.  Self-dubbed "Amateur Investigators, Mike and Jackson begin the series with half-hearted intent mixed with rather unfunny moments, which is unfortunate since they are both comedians and the series was produced by, among others, Funny or Die.

The episodes are broken down by facts and theories and are well organized despite the fact that the two really have very little idea of what they are doing.  They begin with Harold's timeline the weekend he disappeared, from his last known sighting on Friday evening to the discovery of his disappearance on Monday morning.  They have a chalkboard for notes and a diorama with toy figures to represent the players possibly involved.  They also have the "family archives", photos and such, as well as copies of the police reports from 1934.

The next few episodes focus on the various theories and possible motives for Harold's disappearance.  Theory one looks at a possible suicide but, being that Harold was building a cabin nearby, his own cabin was left open with his oil lamp burning and nobody was ever found, it is rather quickly ruled out.  Theory two suggests migrant workers building highway 35 may have gotten drunk and killed Harold on their way back to camp.  Theory three suggests Harold may have been gay and "some folks in them parts" wouldn't have wanted that lifestyle in their town and finally theory four considers the idea that the neighbor killed Harold over a dispute of a land sale transaction.

Sometime over the course of their "investigation" Mike and Jackson go from somewhat mocking the process to, not only enjoying it but feel as though they are making headway in solving the mysterious disappearance.  They truly become amateur investigators and suffer all the highs and lows of discovering a lead only to be disappointed when turns out to be a dead end.  They manage to enlist the services of others who have some incredible technology at their disposal and give investigation updates on the local radio station.

What starts out as a mocumentary morphs into an honest and true documentary investigating a cold case file from Haliburton, Ontario.  Though it has a slow start, the series becomes more intriguing with every new theory and clue that is uncovered and because the episodes are only 30 minutes in length it is easy to binge-watch it in one sitting.

While I'm pretty sure For Heaven's Sake isn't going to become some sort of cult classic series, it is entertaining, interesting, and intriguing.  Only time will tell if it will "catch on" like a certain other series from last year that involved owners of large cats.

For more information about For Heaven's Sake visit the FlickDirect Movie Database. This release has been provided to FlickDirect for review purposes. For more reviews by Allison Rose please click here.

For Heaven's Sake images are © CBS Studios. All Rights Reserved.