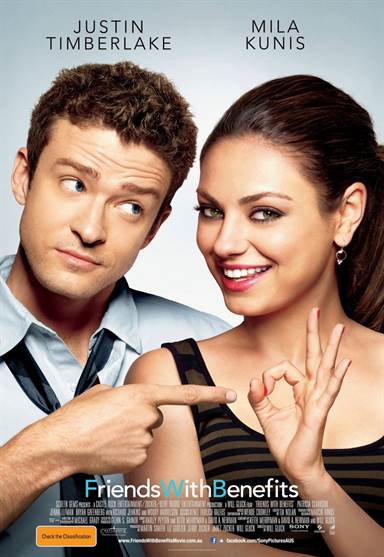 Purchase  DVD/Blu-ray/4K UHD
What saves this remix from taking a nosedive into oblivion is the cast.  Friends With Benefits' Mila Kunis and Justin Timberlake are the winners here who outdo Natalie Portman and Ashton Kutcher in their attempt to jazz up friendship with sex in No Strings Attached.  So if you haven't seen the latter, then don't miss Friends With Benefits, it's a stitch.
Dylan's (Timberlake) a young star as an Art Director in LA who seems to be getting along just fine with his fellow workers. On a lark he takes up an offer by New York headhunter Jamie (Kunis) to interview for an opening at GQ magazine to head up their Art Department.  Dylan gets offered the job and after a lot of coaxing by Jamie decides to take it, but on one condition, she be his friend while he transitions.  When their other relationships don't pan out sexually, Dylan and Jamie turn to a mutual bedroom solution to that problem.
Timberlake and Kunis save the film with their chemistry for each other.  The relationship has a nice romantic touch that really differs from the raunchy one between Portman and Kutcher in No Strings Attached.   The lead-in between the two in Friends With Benefits has a more realistic connection with Kunis's character Jamie being more of a crutch for Dylan in the city of high energy and fast lane business.  And as far as the sex goes, it may not be as SPICY as Kutcher and Portman, but there's more tenderness and passion here.
Director Will Gluck uses a lighter touch with his actors not overdoing the sexuality to make it the only interest in the film.  His ability to use Kunis's comedic torch to catch Timbelake's Dylan soft naiveté off guard makes many scenes funny that would ordinarily be filler in most films.  And when he brings in a scene that would turn most audience into a remorseful mood, he uses it to tighten Jamie and Dylan's relationship even more.
Should you go see the film at the theater?  For those who have seen No Strings Attached it's a maybe; for those who haven't make it a date night.  Friends With Benefits is certainly worth the watch.
Friends With Benefits is rated R for sexual content, language and some drug material and it is no film to take immature youngsters.

Purchase a DVD/Blu-ray/4K UHD physical copy of Friends With Benefits today at Amazon.com

Download Friends With Benefits in Digital HD/4K from the iTunes store.

For more information about Friends With Benefits visit the FlickDirect Movie Database.